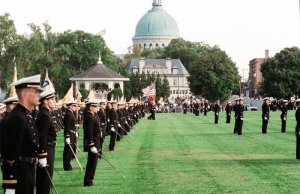 Shortly before 8:55am on September 11, 2001, I entered my Literature of War course in Sampson Hall at the United States Naval Academy. We were still near the beginning of the semester, the last semester of my college teaching career. The midshipmen looked uncharacteristically confused and unsettled. One of them asked me to turn on the television. They’d heard about some enormous calamity. Soon we were magnetized, almost traumatized, by repeat footage of the initial collision of an aircraft with one of the Twin Towers of the World Trade Center. As the mix of news, conjecture, and wild rumor accumulated, it was suddenly ramped up by news and pictures of another plane blasting into the other tower.
It wasn’t long before we all suspected that our lives had changed dramatically. Our personal lives and our lives as U. S. citizens. These young men and women were processing their futures as junior officers in the United States Navy or Marine Corps. We talked a bit about what was going on. Facts were few. Still, there was something about the mids that impressed me. They were ready, or committed to being ready, for whatever was out there. They would not turn away from their responsibilities. That determination was written on their faces and in their voices. Also, they were smart enough to be afraid. I was proud of them. I still am.