What follows is a the opening of a review first published by the Jewish Book Council. The full review is available on JBC.

This powerful, intelligent, and highly moving memoir explores with readers the persistence of trauma as it affects children of survivors. Helen and her sister Lara, as they grew up, had gathered pieces of their parents’ (and other relatives’) Holocaust experiences.  They realized, with varying degrees of trepidation, that much had been hidden from them.

The parents’ large personalities release hints that burst through the masks, signaling

that much had been withheld. The secrets involve a sense of shared obligations, daring decisions, invented biographical details, and doses of crippling shame. The daughters lived in a shadow world that had its own life, one that was only slowly and partially revealed. It’s almost as if the mother and father were ashamed of surviving, and parts of their disguised cover stories, once revealed, explain why.

As a writer, Fremont is a fine clinician, pressing to understand and explore her trauma inheritance. Over and over, she shares searing incites and devastating disappointments.

Her life and worth become a strange kind of penance for never truly knowing the sacrifices that the parents had to endure, submerge, and transform. The parents manifest a sorrowful kind of survivors’ guilt that they transformed into a range of valuable accomplishments. Always fearing exposure, they strove to steer the daughters away from experiences and decisions that might risk exposure of the almost buried past. They overstepped the normal borders of familial love, using parental power as a weapon rather than an embrace or commendation. They were monstrous in the way they played favorites.

For decades, the sisters were psychologically victimized and manipulated into making each other victims. . . .

This article was originally published by Jewish Book Council. JBC enriches and educates the community through public programming, a literary journal, weekly reviews and essays, discussion questions, and over twenty literary awards. Find out more here.

This is an utterly charming novel that also has grit, strong insights into human nature, and plenty of regional detail for readers who will enjoy the SW Florida setting, Mr. Mills builds upon his many years of legal experience to draw readers into the world of a marriage gone wrong and its possible resolution. He also laces the story with local history and builds part of its premise from that history.

Though set primarily in the present time, the story begins at the outset of the 20th century with a family secret. Readers learn of an anguished man, Jim McKenzie, who desperately needed money to afford a cure for his daughter’s tuberculosis. He steals a gold cross which he intends to turn into the cash that he needs. However, things don’t go well and he ends up burying the artifact on the island of Cayo Costa. He writes a detailed letter to his wife Claire that describes the location of the cross, and that letter eventually finds its way into the hands of is distant relative, Lynn Chapman. However, the cross remains hidden. 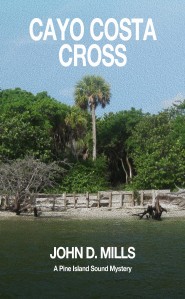 Lynn’s greedy, conniving husband Bobby is about to face her in court if a mediation is not successful. He has convinced himself that he has the right to profit from Lynn’s potential inheritance, and he has taken some steps recover it.

The mediation does not go well, in large part because of Bobby’s nasty, self-aggrandizing personality. However, this section of the novel is fascinating in outlining how the legal system works. Readers meet several interesting characters including Lynn’s lawyer Beth Mancini; Beth’s boyfriend Frank Powers, who is a prosecutor with the State Attorney’s Office; and Michelle Barnes, the official mediator for the Chapmans’ case. Through these characters and many others in the course of the novel, legal abstractions become clear and personalized.

Bobby Chapman does have some potentially useful talents. He has the technological skills imagination that enable him to invent a way to possibly retrieve the long-hidden gold cross hidden on Cayo Costa island.

Bobby’s approach includes burning the vegetation on the island to the ground to help uncover the cross’s hiding place and, later, employing a drone and explosives to threaten his wife and her new paramour from discovering it first. Bobby is filled with hate, and the author’s portrait of his childhood and upbringing brings understanding about what makes him tick. He is shaped by an unappealing macho / good old boy culture.

The man making romantic inroads on Lynn’s heart is Doug Shearer. When Lynn decides that she needs to employ a private detective to find the cross before Bobby does, Beth recommends Doug for the job. It’s a fortuitous match of personalities. Doug has a background in law enforcement. He is one of several characters through whom Mr. Mills paints a very positive and uplifting picture of people with law enforcement careers.

John Mills uses his descriptive skills to provide a wide range of characters, the flavor of the Lee County fishing and boating community, and many other touches of local color. The author offers a good introduction to the islands that dot the waterways. Readers will enjoy the growing relationship between Lynn and Doug. This reader wouldn’t mind meeting them again in another novel.

John D. Mills is a fifth generation native of Fort Myers. He grew up fishing the waters of Pine Island Sound, and it’s still his favorite hobby. He graduated from Mercer University in Macon, Georgia with a BBA in Finance and worked for Lee County Bank in Ft. Myers for five months. He returned to Macon and graduated from Mercer’s law school in 1989. He started his legal career as a prosecutor for the State Attorney’s Office in Fort Myers. In 1990, he began his private practice concentrating in divorce and criminal defense. Cayo Costa Cross is his eighth novel. This novel, and several other recent ones, comprise the Pine Island Sound Mystery sequence. The related books include: “The Trophy Wife Divorce,” “The Hooker, the Dancer, and the Nun,” and “Pine Island Gold.”

Q: What is your favorite part of the writing process?  A:   Crafting a surprise ending!  I’m an avid reader and I always enjoy an unexpected twist/surprise at the end of a book.  I spend a tremendous amount of time trying to do this in my books.

Q: What writing challenges give you the most trouble?  A:  When I’m trying to do a compelling back story on my characters.  I don’t like anyone to call my characters boring or predictable!

Q: Do you compose by parts or by wholes?  A:  I try to do a basic outline of the story before I begin writing.  After the outline is done, I break it into pieces – sort of like a jigsaw puzzle.  Of course, during the 2nd & 3rd drafts of the book, I add a little more information about the characters and subplots that I try to bring together at the end.

Q: What are your habits of revision?  A:   I have learned to pay all different kinds of people to help me edit different drafts of the book.  Young, old, middle-aged, book-smart educated, self-taught educated, religious, non-religious, superstitious, OCD, and people with different backgrounds than me.  I have learned that different people see things that are confusing to them, and they relate to character conflicts in unique ways.  I’m always amazed at the different responses I get from my editors.  As a follow-up, I hire different editors for the second and third drafts to try t0 create an entertaining read.

Q: Are there common skills that connect your work as a novelist with your work as a lawyer?  A:  Different people have their own “versions” of the truth and I try to have my characters promote their own “version” of the truth to create conflict between the characters.  Q: Are there any features of your experience as a fisherman that overlap with your fiction writing?  A: Patience!

Q: Who are among your favorite writers?  A:  John Grisham, John D. McDonald, and Randy Wayne White.