Diane Ketcham, author of the recently released novel “The Vanishing A-List,” was an award-winning columnist for the “New York Times.” Her beat was Long Island, especially the Hamptons and the celebrity scene. She also has written a nonfiction book about Long Island called “Long Island: Shores of Plenty.” Not only did Ketcham gain recognition as a print journalist, she also appeared weekly as a commentator on the PBS station WLIW.

Now a Naples resident, Ketcham makes good use of her first-hand knowledge of Eastern Long Island A-List character types, nearby New York City (where so many A-Listers have their in-town residences), and the Florida extensions of that moneyed, style-setting community. She spins a suspenseful tale of obsession, capture, confinement, and abuse in eighty-two bite-sized chapters. With chapters this short, readers are never far from a place where they can conveniently put the book down, but most will not be able to put it down for long.

Does is seem peculiar that Ketcham’s heroine is also a journalist on a major (though fictive) New York newspaper? Attractive, youthful, career-driven A. J. (Jazz) Billings, already a Pulitzer Prize recipient, finds herself covering a Washington press conference on Everglades issues. She had been asked to fill in for another reporter and question Congressman James Fennimore Whitman about his association with Armando Guyera, a wealthy Argentinean rumored to be running an art smuggling operation. 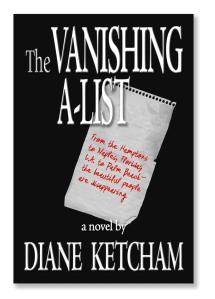 Soon enough, she recognizes Whitman as a man with whom she had recently enjoyed a reckless, uncharacteristic one-night stand! Whitman pushes the question aside, but quickly asks an aide to find out who that woman is and what she knows.

Calling her boss in New York, Jazz finds out that there is a potential story awaiting her if she’s interested. A cosmetics tycoon is concerned about the seeming disappearance of his A-List playgirl daughter. Is Paine Hayes simply on one of her romantic adventures, or has she met with some kind of foul play? Once Jazz begins poking into this mystery, she gradually uncovers a strange coincidence – several young A-Listers seem to be missing. In fact one of them turns out to be Congressman Whitman’s younger sister, Chris.

As Jazz continues to investigate, and the number of vanished A-Listers grows, she searches to discover if there is a common thread to their disappearances. And, more and more, is seems as if Armando Guyera may have something to do with it. Meanwhile, a frustrating kind of hit-and-run romance builds with the congressman.

It is difficult to say much more about Ketcham’s plot without giving away too much. Jazz’s investigation crosses paths with one being conducted by the FBI. She runs into FBI good guys and bad guys, but which is which? Her own assistant is slain, and Jazz herself falls into the clutches of the evil, over-the-top character responsible for the vanishing celebrities.

For all of its many attractions, “The Vanishing A-List” is light fare and Diane Ketcham does not take herself too seriously. Not only is the primary villain over-the-top and almost comically grotesque (and yet still truly frightening), so are several other characters. Notable among these is Jazz’s mother, a dramatic Georgia belle named Delilah Cordelia Billings who named her daughter Agatha Jasmine (A. J.). Delilah provides some comic relief, as does A. J.’s pooch – a very studly Labrador named Willie whose own escapades almost become a minor subplot.

On Friday, November 23, Diane Ketcham will be signing her book from noon until 2pm at the Paradise Gift Shop in the Pavilion Shopping Center. On November 24 and 25, between 10am and 5pm, she will be one of the exhibiting authors at the Naples Press Club booth during the Naples Renaissance Fall Art Festival along 10th Street South. On December 8, you can find Ketcham at the Gulf Coast Town Center branch of Borders from 1-3pm and then from 5-7pm at the Naples branch of Borders. Find out more about Diane Ketcham and her colorful, fast-paced book at the website tidelowpress.com.

Aram Schefrin is one of the 30,000 authors who has published through the services of AuthorHouse, but clearly he is one of those self-published writers who deserves the status of a traditional publisher and a prestige imprint. His fourth novel, “Marwan: The Autobiography of a 9/11 Terrorist,” is a taut, well-paced exploration of a key episode in contemporary history. Suspenseful and illuminating, “Marwan” is brilliantly balanced between the compelling narration of known facts and the imaginative response to unanswered questions.

Who are these people who could find themselves attracted to the suicide mission of flying American airliners into the towers of the World Trade Center, the Pentagon, and, if all had gone according to plan, the Capitol Building? What shaped them? What made their destinies inevitable? How did they relate to one another? How did they form their opinions about the United States and its purposes? How convinced were they of the holiness of their martyrdom? How pure was their Islamic faith? Schefrin examines these and other questions in the course of his bi-level narrative that moves along two timelines.

One timeline begins in autumn of 1996, when several of the principal players are first brought together in Hamburg, Germany. This timeline unpacks in chapters that alternate with those fleshing out another timeline that moves forward from its June 2000 point of attack in New York City. The earlier timeline is narrated in the third person by a voice that stays, for the most part, outside of the characters’ heads. Its sequence of events eventually catches up to the second timeline, which is Marwan’s narrative – his so-called autobiography. Here Schefrin gives us an intimate portrait of his title character’s thoughts and feelings – and his frequent stretches of ambivalence and confusion.

One could take issue with the autobiography premise: the dead don’t write memoirs, and it would have been much easier to accept the discovery of a secret journal. But perhaps Schefrin wondered how Marwan’s journal-keeping could have been kept hidden from his demanding, commanding leader – Atta. At any rate, this logical leap is finally worth the risk as it enables us so fully to share the principal character’s experiences. (Or perhaps he is writing from Paradise, with or without the 72 Virgins.)

Some readers will be offended by the book, as it may seem to ask for sympathy with its characters’ views and, finally, a sympathetic understanding of their actions. But I don’t think it has to be read that way. We can learn much from Schefrin’s novelistic speculations, which are grounded in firm and realistic insights into human nature.

“Marwan” has several strengths, not least among them Schefrin’s handling of the various settings through which his characters move. The map of the novel includes not only Germany and New York, but the Boston area, Las Vegas, Pakistan, Cairo, Dubai, Spain, Oklahoma, and those three key Florida towns: Sarasota, Venice, and Hollywood. Sure-handedly, Schefrin mixes action, densely-textured setting and atmosphere, and characterization. He fashions a convincing world filled with sensory detail that lends credence to the more speculative and abstract dimensions of the novel.

The author does a remarkable job in keeping the reader engaged, especially considering the fact that the outcome is known from the beginning. Along the way, we come to appreciate (or, more likely, be stunned by) the brilliant simplicity of the terrorist plan and the ease with which a series of interim goals were accomplished, leading to the ultimate objective. That is, we see how ineffectual our security was, and we can and should wonder about how much it has improved over the last six years – and at what price.

Aram Schefrin, who lives in Wellington, Florida, practices law there as well as in Rhode Island. For a six-year period beginning in 1968, he was part of the jazz/rock fusion band Ten Wheel Drive. You can find out more about Mr. Schefrin, including his innovations in podcasting fiction, his other novels, and his love for polo ponies, by browsing aramschefrin.blogspot.com. The audio version of “Marwan” is available from podiobooks.com, the print edition from the publisher and from major online booksellers.