A Florida farm’s fall festival becomes a setting for murder

This is #15 in “The Bad Hair Day Mysteries” that have won Ms. Cohen many fans – and many imitators – over the years. The author continues to maintain her status as the queen of the cozy mystery, a genre that she not only exemplifies in her own fiction but also defines and gives advice about in the expanded second edition of her guidebook “Writing the Cozy Mystery” (Orange Grove Press, 2018). There are four essentials: the sleuth must be both female and an amateur, and readers must encounter that sleuth fitting her crime-solving into a larger, multifaceted life within a well-defined community. 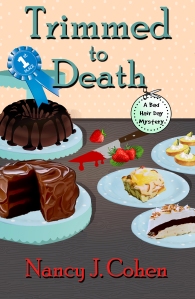 Marla Vail, who runs a hair salon in the South Florida town of Palm Haven, is all excited about participating in a fall harvest festival sponsored by Kinsdale Farms, located at the western edge of Broward County. Local business bring attention to themselves by sponsoring competitions that attract entrants who sign up months in advance. The general public just loves the goings-on, the food, and the high spirits.

Marla has entered the baking competition, hoping that her coconut fudge pie will take the prize. 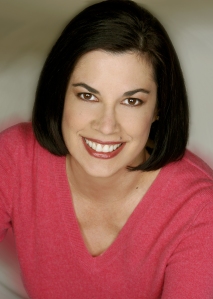 Ms. Cohen introduces a very large cast of characters who are involved in the festival in some way. One, Francine Dodger, runs a magazine, another is a chef, and another is a food critic. The festival is a time for people to re-acquaint and to network. It’s also a time for fun.

Francine has set up a Find Franny contest for the festival, a kind of scavenger hunt that involves collecting cards, getting each stamped by answering a question correctly, and being the first to report to Franny with all of them stamped.

Only problem is that when Franny is found, she is dead: murdered! 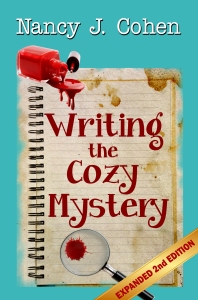 Marla’s husband – Detective Dalton Vail – will lead the murder investigation. Yes, you guessed it. Marla will be very busy doing her share of the investigation in her own way. For Dalton, it’s just another case – one of many that will occupy him every day and often for long hours.

For Marla, it’s a task (more like an addiction) squeezed in along with running her business, mothering Dalton’s 18-year-old daughter Brianna, running the household, networking all over own, dealing with her parents, etc., etc. Meanwhile, she is concerned about her clock running out before having a child by Dalton. . . .

To read the full review, as it appears in the November 29, 2018 Naples Florida Weekly and Bonita Springs editions, and the December 5 Fort Myers edition, click here: Florida Weekly – Trimmed to Death

This is the 8th installment of Ms. Burdette’s Key West Food Critic mystery series, featuring the lovable Hayley Snow. This time out, it’s under the imprint of a new publisher. When a major three-day event is planned to find common ground between the cities of Havana and Key West, Hayley’s mother gets the catering contract. The venue is the Harry Truman Little White House. As the conference approaches, conflicting political agendas seem likely to undermine this good-will opportunity. They are also undermining the aspirations of the man who manages the Little White House facility. 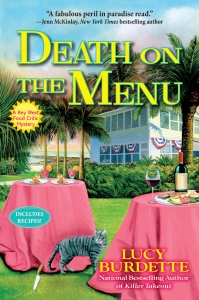 Hayley and Miss Gloria (Hayley’s 80+ year old landlady and friend) are pressed into service to help with the catering chores. Meanwhile, Hayley is being pushed by her employers at “Key Zest” magazine to meet several deadlines.

Members of a Cuban-American family get caught in the tangle of cross-purposes, and there is a scandal over the disappearance of a rare piece of Hemingway memorabilia that has been loaned to the event by the Cuban visitors. It has been stolen from its display case.

Who stole it? Why? How and why was Gabriel, a member of that Cuban-American family and assisting the event, murdered?

Well, of course, Hayley can’t help pushing herself into the investigation, even while warned about going too far by her boyfriend, police Detective Nathan Bransford. 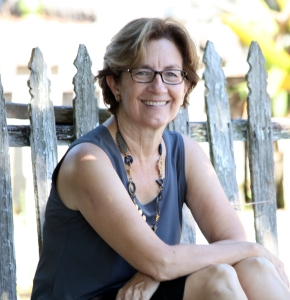 As with previous titles in this series, Hayley’s investigations give Mr. Burdette the opportunity to provide colorful – and flavorful – tours all around Key West. The author brings this unique town fully to life, in both its physical and cultural dimensions. The inside look at the Truman Little White House is delightfully engaging, as is the portrait of the Hemingway home and all the adjacent neighborhoods. Hayley’s connection with the conference catering, as well as her need to generate three restaurant reviews for “Key Zest,” takes readers into a series of food establishments. The focus for the conference menu and for Hayley’s column are Cuban specialties, and these vivid scenes will make readers’ mouths water.

Suspense tightens when a relative of the murdered Gabriel is at first missing and then found seriously injured. It gets even tighter when Detective Bransford allows Hayley to play a dangerous role in the investigation as part of the detective’s plan to draw out the perpetrator. . . .

John Guzlowski beautifully conjures up the seamy side of the allegedly innocent 1950s with a thrilling serial murder mystery featuring two boozehound detectives. For Detective Hank  Purcell, memories of World War II, now ten years distant, invade with regularity. Both he and his Jewish partner, Marvin Bondarowicz, have been known to break the rules. Both men are survivors of the mean streets, appealing in their humorous repartee and in their willingness to seek justice, even if insubordination is part of their means to that end. 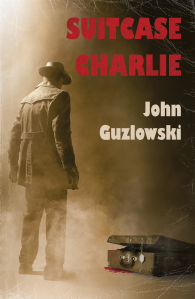 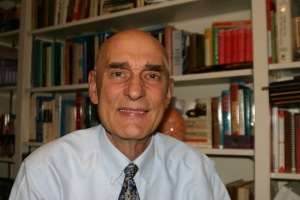 The case Hank and Marvin are on requires an answer to this question: Who cruelly dismembered a young boy and stuffed his body into a suitcase left on the sidewalk, no doubt meant to be discovered? What is the motive for such cruelty? Hank can’t help but remember the Nazi butchery he witnessed firsthand. Has it found its way to 1956 Chicago?

Soon after the detectives undertake their investigation, several parallel incidents occur; it’s unclear if this is a crime spree by one perpetrator, or if these are independent copycat murders. What will the effects of these horrendous crimes be in the neighborhoods where the suitcases turn up? Why these neighborhoods? Why are the soles of the victims’ feet sliced in an isosceles triangle pattern? To represent, when placed together, the Star of David?

Slowly but surely, the author builds credible references to anti-Semitism and its consequences. Leads appear that Hank would like to pursue, but Marvin, who now announces himself a defender of his people – in fact, makes it clear that their persecution had been his motive for becoming a cop – turns Hank away from pursuing the anti-Semitic possibility. After all, the victims in the suitcases are not Jews. . . .

To read the full review, as it appears on the Jewish Book Council site, click here: Suitcase Charlie

This is the fifth of Mr. Larsen’s David Slaton Novels, and it is an amazingly ambitious addition to an ambitious series. A former Mossad operative, Slaton finds himself in a situation in which all fingers point toward him when a series of skillful, high-tech assassinations take place. Now trying to live a no-profile domestic life in order to protect his wife and young son, Slayton knows that he must track down the killer whose efforts are endangering his loved ones and his desire for a tranquil family life. 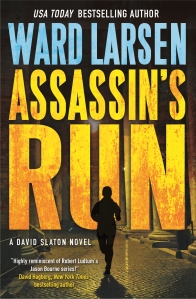 He finds himself in the middle of a complex adjustment of the world’s strategic order.

The victims of the unknown assassin are Russian oligarchs who are killed in various settings, each slain by a single bullet that has traveled what seems to be an impossibly long distance. The scenes that reveal how Slaton discovers the exotic technology that his double has been armed with and mastered set an extremely high standard. What Slaton discovers is a large caliber guided bullet that can be programmed and adjusted in a way that parallels the technology of a guided missile. 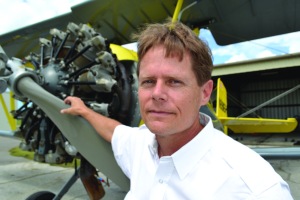 Slaton is approached by CIA agent Anna Sorensen who engages him in an effort to find out why – and by whom – the super-wealthy associates of Russia’s government leader, Petrov, are being threatened.

A weighty handful of additional plot strands slowly become intertwined with the initial action. One involves the private, secretive retooling of retired Russian jet fighters (MiGs) as drones. Another concerns the high-security annual assembly of the extended Saudi royal family. Yet another strand details the convergent mission of three freighters owned by a private Russian combine. We meet Russian military officials, engineers, ship’s captains, and a wide variety of functionaries necessary to populated and sustain the overall plot.

We also, standing behind the characters or the narrator and looking over their shoulders, perceive fascinating vistas. Assassin’s Run is quite a travelogue, taking us to vividly described scenes in Capri, Vieste, Sebastopol, Amalfi, and Rome. We also visit CIA headquarters in Langley, Virgina; the Kremlin in Moscow; Davos, Switzerland; Marrakesh, Morocco; and a collection of other locations. Some visits provide extended views, others a snapshot. The settings feel authoritatively written, but one yearns for a map. . . .

Soon in other local editions.

“Death in Shangri-La” by Yigal Zur 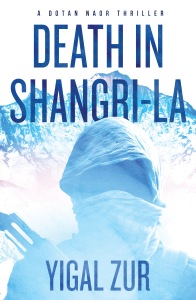 This high-stakes thriller—the second of three titles in the Dotan Naor Thriller series, but the first to be translated into English—takes its protagonist, a former Israeli security operative now working as a private detective, far outside of his usual terrain. It’s not Israel or Israel’s neighboring states that Naor visits on his mission, but the Far East: India, the disputed Kashmir region, and other Asian nations touched by the Himalayas. 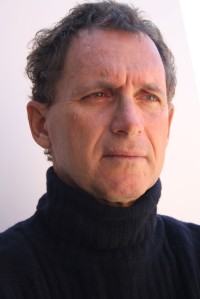 Naor has agreed to find the missing son of an acquaintance who has made millions as a cutthroat Israeli arms merchant. Willy Mizrachi’s son, Itiel, is seeking peace at an ashram in the Himalayas, a region popular with young Israelis. In his father’s eyes, Itiel’s goals are worthless, yet Willy believes he’s redeemable, or at least persuadable. He wants him back home. . . .

To read the full review, as it appears on the Jewish Book Council site, click here: Shangri-La