The University Press of Florida has published an unofficial series of books about the state’s role in American’s popular music. These include “Florida Soul: From Ray Charles to KC and the Sunshine Band,” “Music Everywhere: The Rock and Roll Roots of a Southern Town” (about the Gainesville scene), and “Elvis Ignited: The Rise of an Icon in Florida” (all reviewed in these pages). Mr. DeYoung’s effort is essentially a biography of a relatively unknown giant in the popular music world. Following along the trail Phil Gernhard’s life, the author paints a vivid picture of the U. S. music industry in the second half of the twentieth century.

Trained neither as a musician nor a businessman, Gernhard picked up what he needed to know through hustle and hard work. He began early, and by the time he was nineteen he had produced a million-copy recording: “Stay,” a monstrous hit performed by Maurice Williams and the Zodiacs. It was 1960, and Gernhard had already recorded a few other songs by his group.

Gernhard’s career was hardly a straight or unbroken line. He had many ups and downs. Still, he managed to produce an amazing amount of recorded music, and a high percentage of those releases become hits, bringing money into the pockets of the musicians, songwriters, studio technicians, and owners of record labels. He succeeded through changing times and changing tastes.

Mr. DeYoung makes it only too clear that Gernhard was an accomplished and somewhat greedy dealmaker, negotiating contracts that gave him many slices of the pie. Sometimes songwriter credit for doctoring a needy lyric, sometimes a percentage for enhancing production quality, and sometimes simply by writing himself into the contract for being able to put all the pieces together. He was labeled as a producer, and he produced.

He worked to get studio time, rehearsal time, radio play, engagements for live performances, and whatever else might make a record a success. When the industry changed from one in which singles lost out to albums in the economics of the industry, Gernhard learned how to adapt and how to help others adapt.

Originally based in his home state of Florida, Gernhard also rose the ladder of influence in such music capitals as Los Angeles and Nashville.

Now it’s time to name names: Dion DiMucci’s career was resurrected by Gernhard with the improbably successful ballad “Abraham, Martin and John.” He produced hits for Lobo, Jim Stafford, the Bellamy Brothers, Rodney Atkins, and Tim McGraw. It wasn’t just hustling. Gernhard was credited with having “magic ears.” He could tell that a song (or a singer) had a lucrative future. He knew how to match a song and a singer for maximum effect. . . .

“Letters to My Palestinian Neighbor,” by Yossi Klein Halevi

Yossi Klein Halevi yearns for a meaningful conversation with a Palestinian counterpart who is willing to read, listen respectfully, and respond. He hopes to determine whether two peoples can share a land while maintaining their separate contiguous states. Halevi understands that his overture must be rooted in his own willingness to listen. With some admitted reluctance, he has accepted the two-state solution as the only way to move forward. 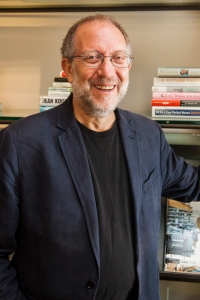 Halevi makes this overture with the utmost sincerity and a fully nuanced understanding of modern Israel’s evolution and challenges. He seeks a Palestinian partner whose desire for peace is equally fervent, a person whose vision of the past includes the understanding that neither party can afford to be stuck in that past. The voice in the letters is filled with empathy, hope, and a bit of despair. It has an inviting, embracing, and winsome lyricism, as well as dignity and resolve—the perfect pitch for its colossal purpose.

Halevi has crafted a sequence of ten letters, imagined for a reader whose dwelling is nearby but who he hasn’t yet encountered. The letters have overlapping concerns, with undulating shifts in emphasis. These concerns include the functions of Holocaust memory, the need to pursue justice, and the many profound parallels in Jewish and Islamic holy texts and religious practices. . . .

Portraits of shakers and makers whose efforts shaped today’s Florida

Made elegant being printed on glossy paper, which makes the illustrations stand out, this is a must-have book for Floridians who love their state and want to brag about it. It will also bring pleasure to readers who love history and enjoy seeing how the present attributes of an area grow out of the creative genius and hard work of far-sighted individuals. Written in an attractive, engaging prose style, it will make a fine addition to any Florida library. It’s also a good choice for gift-giving. 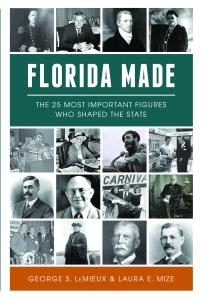 The essays touch some common themes, but they are essentially independent. Readers can choose their own pace regarding whether to read a chapter at a time or move along through four or five before taking a break.

Many of the names will be familiar and thus expected. Yet even when reviewing the profiles of Walt Disney and Margery Stoneman Douglass, most readers will encounter information they didn’t have before. Florida Made is a user-friendly way of absorbing Florida history and learning how especially talented and dedicated individuals make game-changing contributions.

Some of the individuals are important because they launched something that gave the state an important new dimension. Ted Arison’s contributions to building the cruise ship industry allowed Florida’s ports to blossom and to make Florida not only a destination but also a gateway to countless other destinations. Now, it’s hard to think about Florida without thinking about the opportunities for pleasurable travel abroad.

To enjoy the entire review, as it appears in the June 13, 2018 Fort Myers Florida Weekly and the June 14 Naples, Bonita Springs, Charlotte County, and Palm Beach editions, click here: Florida Weekly – Florida Made