Florida event planners know that by November the early fall trickle of vacationers and snowbirds turns into a stream. Even booklovers find a proliferation of events focused on their interests. Here are some upcoming book events for the calendars of readers and writers.

Locally, M. B. Weston continues to give writing workshops at the Naples Barnes and Noble at Waterside Shops. A young adult workshop on the art of storytelling will take place on October 25 at 7:30pm. Weston’s book signing will follow at 9pm.

On November 24 & 25 on 10th Street South near the Naples Depot, the Naples Art Association will hold its Naples Renaissance Fall Art Festival. Several local authors will be exhibiting, selling, and signing their books at the Naples Press Club’s tent. These authors will include Leon Hesser, Virginia Saalman, and Sandy Lender. The exhibit, open from 10am to 5pm each day, will preview the Authors & Books Festival and Naples Writers’ Conference that will take place at the von Liebig Art Center on April 5 & 6.

Florida best-seller Robert Macomber will be making an appearance at Mina Hemingway’s Bookstore in its new location on Immokalee Rd. just east of Sam’s Club. This wine and cheese gathering, on November 27 from 5-7pm, will be part of Macomber’s book tour for his latest title, A Different Kind of Honor. Macomber is a fine writer of historical fiction and a fine entertainer as well.

On the evening of Sunday, Dec 2nd, Macomber will be the guest author and speaker for the 50th anniversary dinner gala of the Collier Library. This event, in part a fund-raiser, is primarily for members of the Friends of the Library, but it is easy enough to join and sign up for the gala if there is still room. Visit http://www.collier-friends.org/gala.html for more information.

Now here’s the lowdown on the major upcoming Festivals, Fairs, and Conferences.

The 2007 Sarasota Reading Festival will take place from 9:30am to 4:30pm on Saturday, Nov. 3 in downtown Sarasota. Presenting sponsors are the “Sarasota Herald-Tribune” and SNN6. Comcast is the producing sponsor. More than 75 author readings and panel discussions, children’s events and performances are planned for this 10th anniversary reading festival, which runs from 9:30am to 4:30pm on Saturday, Nov. 3 at Five Points Park in downtown Sarasota. Headliners include Lou Dobbs, Gene Wilder, and Barbara Taylor Bradford. For a complete list of authors and presentation schedules, visit http://www.SarasotaFeadingFestival.com.

The Miami Book Fair International is truly the big deal of book events in our state – and one of the major events in the nation. The principal exhibitions and presentations take place on November 10 and 11 on the Wolfson campus of Miami-Dade College, just across Biscayne Blvd. from the Bayside shopping area. Though there are eight days of events, it’s the weekend Street Fair that you must not miss. More than 250 publishers and booksellers exhibit and sell books in a festive atmosphere. The International Pavilions Village showcases the literature, fine arts and folklore of many nations. The Children’s Alley includes book-inspired theater and arts-and-crafts, storytelling, and readings by children’s book authors from around the world. The Antiquarian Annex showcases rare books, signed first editions, original manuscripts and other collectibles. On Saturday and Sunday, the Festival of Authors – which runs on a limited scale earlier in the week –

continues, as more than 350 authors present their works, including the Latin American and Spanish authors who participate in the Ibero-American Authors Program, and the up-and-coming Florida writers who participate in the Write Out Loud Reading Series. Celebrity authors are too numerous to mention. Check out the entire dazzling program by exploring www.miamibookfair.com. 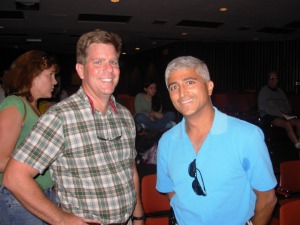 The Florida Writers’ Association Conference runs from November 9 through November 11 with multiple concurrent sessions through Friday, Saturday, and half of Sunday. It will be held at the Disney Coronado Springs Resort Convention Center in Orlando. The problem with a conference program this ambitious is that for every workshop you attend, you miss another three or four scheduled at the same time. Still, having a range of choices can be a plus for attendees. Many of the weekend’s workshop leaders are giving several presentations. You can find the details on the website http://www.floridawriters.net.

Philip K. Jason, Ph.D., is Professor Emeritus of English from the United States Naval Academy.  A poet, critic, and free-lance writer with twenty books to his credit, this “Dr. Phil” chairs the annual Naples Writers’ Conference and Authors & Books Festival presented by the Naples Press Club.

Lorraine C. Ladish, a Naples resident for the past two years, has published a dozen books with traditional “trade” publishers. She has published nonfiction titles on eating disorders, pregnancy, and writing – among other topics. And she has published novels and short stories as well. If you don’t know Ladish’s work, it’s probably because you don’t look for books written in Spanish. That may change as Ladish explores the possibility of bringing out translations of her Spanish titles and seeks publishers for new works written English.

Ladish, who moved to Naples because her husband’s career as a civil engineer brought them here, essentially has two first languages. Born in Spain to a Spanish father and an American mother, she was bilingual from the start. Even while a student in Spain, she studied at a British School – King’s College in Madrid. She was also a student of English and Spanish Literature at the University of London. While still a youngster, Ladish taught English in Spain. And she has worked as an interpreter and translator (including translating many television sitcoms), though one career path she hopes to return to is that of fitness instructor. She can “switch from one language to another in a nano-second.” 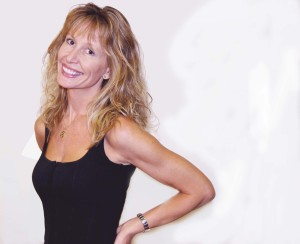 The writing bug infected her early, perhaps because her father and grandfather were both writers. In fact, her father is a lexicographer who single-handedly writes dictionaries. As one might expect, Lorraine Ladish’s relationship to words is quite different from his.

Ladish began writing and publishing in Spanish simply because she was living in Spain. She has developed a following and will continue to bring out books with Spanish publishers. In fact, her thirteenth title will soon be out, she is pushing to meet deadline on number fourteen, and number fifteen, a novel, is in the works.

“In Spain,” Ladish explains, “I’ve lived in Madrid, Málaga, Valencia, spent a long time in Barcelona and eventually moved to Seville for eight years. My daughters [now six and three years old] were born there and I love that city. I wrote many books in Seville, where I lived in a penthouse that used to be part of a convent. Very inspiring. I also taught a writing course there and this year the syllabus I designed for it was published as a book, ‘Writing, Within Your Reach.’”

When I asked Ladish about her habits as a writer, she told me that she often works from outlines, especially on nonfiction projects. Early in her career, she hated rewriting, but she has since learned its value and now enjoys revising, though she is not compulsive about it. Since becoming a mother and moving to the States, she has shifted her writing time from late-night to whatever fits her children’s schedules. But Ladish confesses that she is a long way from becoming a morning person. 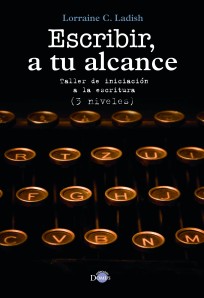 She writes out of passion. “The important thing for me is to have a message to convey, something I feel I HAVE to and NEED to get across. I guess that makes my writing more powerful.” She adds, “I’m a passionate person, and I write passionately too. That is what keeps me in print and hopefully what is opening the door to the English-speaking market for me.”

A few months ago, Ladish signed a contract with a literary agent in New York. This contract is for a book in English that she started thinking about when she moved back to the U.S. Her agent is very enthusiastic, and Ladish and her coauthor are refining the proposal for U. S publishers. She says, “I’m extremely excited, since it is next to impossible to get an agent here, and ours said YES to my proposal fifteen minutes after receiving it by email!”

While continuing her book-length projects, Lorraine Ladish freelances weekly for Hispanic publications in South Florida, writing profiles, kids’ sections, and book articles. But books are what most fully engage her: “Each new publication is like a ‘shot in the arm’ that wears off … and then you need to get another book published to get that fix. Now I’m more relaxed about publishing, because I think I’ve already proven myself (to myself!), and sometimes I wish I didn’t have deadlines.” Other passions include dancing and photography.

Ladish’s titles, rendered in English, include “I Feel Fat,” “Learning to Love,” “Voice Mail,” “The Challenge of Writing and Publishing,” and “I’m Expecting, Now What?” You can find out more about this versatile writer from her bilingual website http://www.lorrainecladish.com.