Harper McDaniel a welcome new protagonist from a much-admired writer

Add James W. Hall to the list of premier mystery/thriller authors who have jumped tracks from a classic series featuring a male protagonist to a new series featuring a female character. Having raved over Michael Connelly’s Renée Ballard and Randy Wayne White’s Hannah Smith, I am now gushing over Mr. Hall’s Harper McDaniel.

We meet Harper on a pleasant February day in her Coconut Grove home. Her husband Ross, an investigative reporter, is shaving while holding their infant son Leo. Harper must snap a picture of them. That’s part of her nature as a professional photographer who is also the daughter of Deena Roberts, a photographer superstar and a suicide. A few blocks away, Spider Combs performs his electronic surveillance of the home, taking pictures and filming the movements of the gorgeous Harper. He knows a lot about this family, a family he has been contracted to destroy. Only Harper survives the fire.

When local police don’t seem to take the case seriously, Harper takes matters into her own hands.

Whomever hired Combs and his associates wanted to stop Ross from finishing his expose about the chocolate industry. Harper, a martial arts expert, seeks justice and revenge. She needs to finish Ross’s work. With the help of her adopted financier brother, Nick; her retired mafioso grandfather, Sal; and – much later in the novel – family friend and movie star Ben Westfield, Harper prepares herself for the only task that will give her life meaning and purpose.

Mr. Hall’s skill in capturing Harper’s emotional turmoil, her ultimate resilience, and her courage adds great verisimilitude to a character who comes close to being a candidate for feminine (if not feminist) legend. The author’s superb rendering of Harper’s tradecraft fuels the legend with astonishing combat scenes. Yet we are always aware of Harper’s mortality, the preparation and capabilities of her foes, and her occasional doubts and fleeting fears. . . .

Jean Harrington’s new “Listed and Lethal” mystery series shares some features with her earlier, five-part “Murders by Design” mystery series (recently reprinted by Harlequin). The main similarity is that the protagonist in each series is a professional woman who is teamed up with a law enforcement officer. That is, teamed up romantically and unable to avoid being involved in his investigations.

As she pursues a real estate deal on the outskirts of Eureka Falls, chances upon the corpse of an attractive, flashy young woman whom she had seen at Ridley’s Real Estate just recently. Though Tallulah Bixby is dressed to kill, someone got to her first.

Soon after, the owner of property in the same neighborhood as Honey’s corpse discovery is also found murdered. You guessed it – discovered by Honey. Hmm. She might be a suspect, except for the fact that she is the narrator. Speaking of discoveries, Honey finds a couple of uncut diamonds near the crime scene.

The novel’s two main centers of interest are the murders and Honey’s love life. With respect to the murders, there seems to be an orchestrated buying-up of properties in the area surrounding the murders, suggesting the need to keep the purchases secret. Or maybe it’s the rumors concerning the diamonds lying about. Murder is one way of shutting someone up. When readers find out that a major casino project is being planned, they may surmise that some in the town are against it. 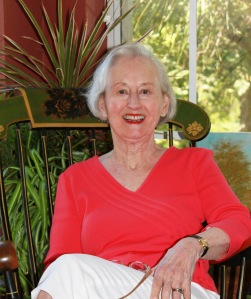 Honey’s love life? Up until now, a series of poor choices. But what’s an attention-needy, somewhat insecure girl to do? These days, Honey is idealizing her attractive boss, Sam Ridley, who is among those showing an interest in those rundown properties. Can he possibly be on Honey’s suspect list? She has imagined getting a dazzling kiss from him for a long time. Honey has been an invaluable employee, but he has plenty of cause to worry about her recent strange behavior. . . .

A penetrating look at forgotten horrors of America’s Revolutionary War

Lynn University Professor Robert P. Watson makes reading history a totally engaging experience. He does so by choosing unusual and challenging topics, setting them into contexts rich in detail, and presenting them in a prose style that is clear, vivid, and uncluttered by academic jargon. His latest book is a piece of fine storytelling, accessible to the general reader. Prof. Watson makes historical events shine as if they were today’s news. Readers will care about what happened on HMS Jersey, the major British prison ship during the American Revolution.

As he must, the author attaches his relatively narrow topic to a few larger concentric circles: prison ships in general; overcrowded British prisons in the colonies and insufficient buildings to repurpose; and the overall Revolutionary War. The book’s spatial focus is New York, particularly Brooklyn waterways, and New England.

The book’s chapters are enticingly compact and action-filled. Each chapter’s opening is graced by a quotation from Philip Freneau’s 1781 poem “The British Prison-Ship,” though while not about the Jersey still gives a powerful contemporary insight into the prison ship horror.

The early chapters provide a detailed overview of the dismal situation for the colonial rebels in the early period of the war. Even under the estimable General Washington, retreat was often the order of the day. Overwhelmed by the much larger British fleet and its professional sailors, colonial forces – even when supplemented by privateers, were not making much headway.

The hows and whys of the turnabout become clear as the narrative proceeds, but once the focus is on the prison situation and the bright idea of prison boats, Prof. Watson’s voluminous research on this generally unknown element takes over. The Jersey is at once the most extreme example of prisoner conditions and the iconic one. It is hard to imagine that over several years 11,500 prisoners died on that ship alone (around twelve per day by 1783) – more than on all the others put together.

I can’t think of another short story collection that I’ve read in recent years that has given me such a jolt of vicarious experience and insight. Original, fraught with every kind of pain, clearsighted and despairing, Mr. Hess’s book takes us to external and internal places that most of us have been able to avoid. And that avoidance has distanced us from people, whole swaths of society, who we have unwittingly depended on to keep us safe – and even prosperous. 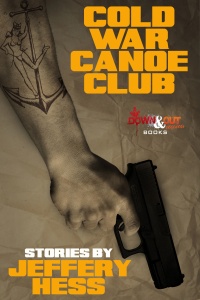 Given today’s concerns about American’s conflicts and rivalries with Putin’s Russia, a group of 15 stories focused on the lives of Navy seamen during the Cold War has an added dimension of relevance. In addition, the stories are amazingly well-written, filled with an abundance of explosive imagery, and presented through unmistakably authentic first or third person voices. Well, perhaps there is a bit of literary overlay on and around these voices.

The lives of shipboard sailors on patrol in potentially dangerous parts of the world are lives of confinement and compression. Their tasks as communications experts or engineers or electricians are tedious and tense. They perform maintenance, make repairs when necessary, and prepare to meet emergencies. A ship is a dangerous place even when not under fire. So many things can go disastrously wrong. Such things happen in Jeffery Hess’s stories.

These sailors are confined spatially, socially, and often spiritually. They depend on one another and yet can learn to both love and hate their workmates. The compression demands release: port days with a bit of time off, prostitutes, and all the drugs and alcohol one can manage or mismanage.

Mr. Hess begins with an early marker of the background history, a story set in 1949 near the outset of the Cold War. He moves us forward through the following decades, beyond the Cuban Missile Crisis, and up to the Reagan presidency’s achievement. He takes us to Lebanon, Turkey, Manila, Naples, Guam, and other places where a U. S. fighting ship might go – or stop.

Through flashbacks and other devices, the author sets these mostly young men into their larger lives: the kind of towns and families they come from, the marriages they have entered and exited, their relationships with the officer class that they serve under, race relationships, the ambitions they’ve put on hold, the children they hardly know, the injuries and other physical hardships that have aged them, and the inertia – or is it momentum? – that keeps them going. . . .

To enhance your reading pleasure, let a Copperfish into your life

Recently, I raced up to Punta Gorda to meet the owners of Copperfish Books. I’m a man who loves bookstores, and I’d never had the opportunity to fish there. My visit was most delightful and informative. Cathy Graham and Serena Wyckoff have created a well-planned, well-stocked, and most comfortable space to browse, peruse, contemplate, and ask for advice. You can even sit down. 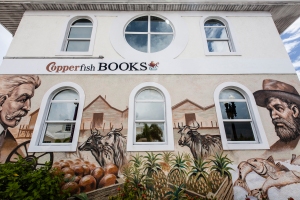 They keep track of and stock the potential and actual best-sellers as well as a wide variety of other new books. Like most independents, they combine new books with used – and they also have an antiquarian section. They stock a deep assortment of Florida writers, particularly Charlotte County scribes, and they offer stimulating selections on Florida yesterday and today.

They will handle special orders, including searches for out of print titles. They have introduced a 20% discount on most newly released adult hardcover books. They insist, “If we don’t have it in stock, we can order it for you.” 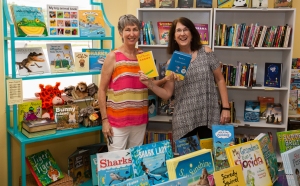 If you, your organization, or your book club need multiple copies of the same title, Cathy and Serena offer 25% off most new books with a minimum purchase of 20 copies. They also have a trading/credit program that can save book addicts a good deal of money. Also, they support local authors by offering to stock their books through a consignment program.

At Copperfish Books, you can enjoy range of literary events. Readings and signings by local authors are scheduled regularly. There is a book club that meets on a website-posted schedule with two sessions on meeting days: 9am and 6pm. New copies of the book club selections are discounted 10%. RSVPs are requested.

Because the owners planned for Copperfish to be a lively cultural meeting space, they made it possible to rearrange some of the display furniture and seat up to 80 attendees comfortably. . . .

To read the entire article, including an interview with the proprietors, as it appears in the August 3, 2017 Charlotte County edition of Florida Weekly, click here: Florida Weekly – Copperfish Books

This article may appear in other editions of Florida Weekly. Let’s hope so! So many books, so little time. 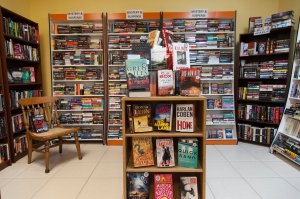