The Two-Plate Solution: A Novel of Culinary Mayhem in the Middle East, by Jeff Oliver. Bancroft Press. 224 pages. Hardcover $25.00.

Do you like something zany? Something that risks going out of bounds? Something that mixes hilarity with an acute awareness of our addiction to so-called reality television and social media? It’s here at last in Jeff Oliver’s tongue-in-cheek fantasy. Come to the playground Israeli city of Eilat and witness the filming of Natural Dish-aster season five. How do ever-pressured producers and staff keep the ratings up? By mixing the ridiculous with the sublime. 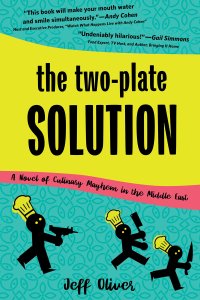 The cast of character is a mind-boggling mix of media-savvy chefs, production staffers at various levels of the power pyramid, Israelis connected to the production as security liaisons, Islamic terrorists, and actors pretending to be Islamic terrorists. Sure enough, the real thing takes over.

The Grand Sheba Excelsior, home of the production (and not yet open to the public), is the scene of several crimes against sobriety.

Sexual appetites are as much on display as foodies lusting for taste sensations. The competition for climbing the executive ladder of the production company is as cutthroat as any kitchen rivalry.

Perhaps only Jeff Oliver could dream up the possibility of a cooking challenge like “baking bread while running through the desert almost getting murdered by slave owners.”

As the aficionados of cooking competitions know only too well, the televised production often offsets the action with the voices of the contestants as they are interviewed before or after that action. Oliver has a lot of fun with this, interspersing his main action with slices of interviews that reveal his characters’ attitudes.

He also has a lot of fun with puns and improbabilities. One of the competitive teams, “Team Mis En Bouche,” prepares a “deconstructed Seder plate” that includes a Palestinian touch to suggest “a time of racial harmony, without walls, and Arabs were one with the Jews.” It doesn’t matter that one of the characters, Al-Asari, comments: “That interpretation of history is insane.” Or does it? 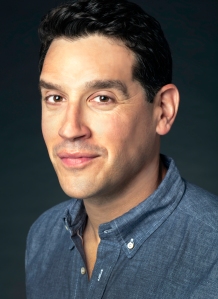 The dialogue among these reasonably well-defined characters is catchy and fast-paced throughout, though sometimes a bit off-color. Oliver has an ear for language, both scripted and spontaneous, and it serves him and his readers well. Indeed, there are so many characters that is astonishing how sharply individualized they are. Catchy names and heavily underscored traits help the cause.

The character through whom Oliver gets the most mileage in revealing the enormous levels of stress and insecurity that haunts this industry is Genevieve Jennings, an executive whose position and future seem in jeopardy. Manic fear and ambition collide in her personality, but she finds a way of coming through. She gets the job done largely on her own terms. But why is she labeled with her last name in a female group including Sara, Ruti, Sharon, and Tanya?

While much of the author’s satiric direction is quickly understood, leaving the book’s structure to be basically a “can you top this” stream of frenzied ingenuity, there are enough refreshing surprises to keep readers turning pages.

One of these is the introduction of Ruchama – The Halva Queen of Eilat – who so impresses the production staff that she is invited to become a contest judge. Taking advantage of her respected skills and knowledge, the chefs compete for an unexpected prize by conjuring the most satisfactory and unusual halva recipe. And why not? Even the ones with savory features stand a chance.

Friendship, romance, and rivalry are the umbrellas under which the many and diverse relationships may be found. And, indeed, relationships undergo changes in this ultimately hopeful adventure.

Oliver knows that settling the Arab-Israeli conflict is no joke, but he chooses to pretend, and invite his readers to pretend, that it is. Or that the answer might be found through humorous exploration. The punning title begins the process. You’ll have to make your own journey to discover how it ends.

Jeff Oliver is Vice President of Current Production at Bravo and a former executive at the Food Network, where he developed the hit series Cutthroat Kitchen and worked on other such epic culinary hits as Worst Cooks in America and The Culinary Adventures of Baron Ambrosia. He is the author of the acclaimed debut novel Failure to Thrive. Jeff lives in Maplewood, New Jersey with his wife, Liz Blazer, and son.

Meet Jeff on Thursday, November 29 at 11:30 p.m. at the Hilton Naples, where be speaking at a special luncheon session of the Greater Naples Jewish Book Festival. For more info, check out www.jewishbookfestival.org

The review appears in the November 2018 Federation Star (Jewish Federation of Greater Naples). It is also found in several local editions of Florida Weekly.

This is the third in Ms. Burdette’s light and lovely Key West Food Critic Mysteries, following An Appetite for Murder and Death in Four Courses. The author has discovered and mastered the structural benefits of the classic space and time unities. These give the energy of compression to her plots. What better way to confine the spatial scope than to set a story on an island? What better island than the simultaneously familiar and remote Key West – a place where real history and legend combine? What better way to set temporal limits than to focus on an exciting, short-term event? 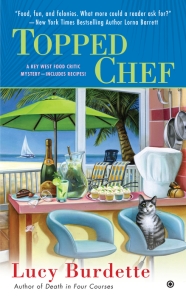 In Death in Four Courses, Ms. Burdette explored laughs and deaths at a literary seminar given over to food writers. Now, in Topped Chef, it’s the short-term and on-the-cheap filming of a realty television cooking show. It’s a competition, of course. Not only are the contestants competing, but it seems as if the judges are as well. Though we’ll find out later how she was chosen for the task, intrepid foodie and amateur sleuth Hayley Snow, restaurant critic for “Key Zest” lifestyle magazine, is on the judging panel.

After Hayley meets her fellow judges and the contestants, the somewhat irritable producer-director, Peter Shapiro, sets things in motion with assistance of Hayley’s acquaintance, the impeccable Deena Smith. A significant number of applicants had already been winnowed to six serious contestants. Now those six, with the judges on hand, would be chopped down to three finalists. The tension builds.

The four judges and three finalists are comprised of strongly individualized characters. Lucy Burdette draws them in broad strokes, allowing readers to sort them out. The judges include Sam Rizzoli, big shot local restaurateur who newest place has been given a negative review by Haley, causing serious friction. The other judges are the thoroughly conceited Chef Adam Boyd; the reserved and hesitant food-writer/memoirist Toby Davidson; and the overly curious motormouth, Hayley herself.

Even more sharply etched are the remaining contestants: flamboyant drag queen Randy Thompson; Buddy Higgs, creator of ingenious dishes based on “molecular gastronomy;” and ethnic combo expert Henrietta Stentzel, with whom Hayley once had a run-in.What’s most fun with this loony crew is Ms. Burdette’s perfect pitch parody of food talk as made familiar on “Chopped” and other popular food programs where judges and competitors try to top each in their descriptions of preparations, styles, successes, and failures.

To see this review in its entirety, as it appears in the May 1, 2013 Fort Myers Florida Weekly, the May 2 Bonita Beach and Charlotte County editions, and the May 9 Naples edition, click here: Florida Weekly – Topped Chef