Like her debut novel A Sahib’s Daughter, this new title by Ms. Harkness is a multigenerational and multicultural exploration of life during and after India’s period as a British colony. Spanning forty-five years, it has as one area of interest the relationships between Indian natives and British tea plantation administrators, revealing the cultural and racial social structure during a period of change.

The central character is Cara Powell, daughter of a Welsh Presbyterian pastor in Shillong, a small city known for its beautiful rolling hills and as a regional administrative center. The pastor dies when Cara is fourteen, and her mother Beula, an orphan of mixed race, struggles to raise her on a slim pension from the church. Fearful for beautiful Cara’s future, Beula is anxious to marry her off. Rather than encourage a relationship with a local boy, Avon, she insists on a marriage to the self-centered and ill-tempered Scottish sahib, Gerard McKenzie, manager of a tea plantation near Sonari in the state of Assam.

McKenzie takes Cara to Sonari, but he never takes her in marriage.

McKenzie is both crude and cruel. Cara’s life with him provides some degree of luxury, but she is disrespected and abused. A man of little education and no tact, he eventually finds himself overwhelmed by social change, labor agitation and other changes in the tea business, and especially by the responsibilities of domestic life and fatherhood.

Cara raises three daughters. Two are her children by McKenzie. The third is the daughter of a neighboring indentured laborer named Saptamita, who has returned McKenzie’s attraction to her. However, this woman realizes that both she and the child would be better off if the girl (McKenzie’s one year old daughter) was taken into the McKenzie household and raised as Cara’s daughter. 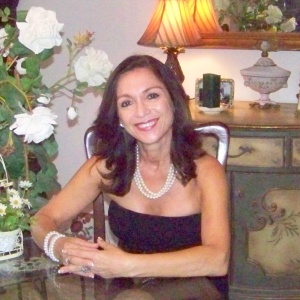 The book’s title comes from the girl’s names, and their names come from their physical features. Saptamita’s blue-eyed child is named Sapphire; Cara’s older daughter, with her father’s flame of red hair and also his temper, is named Ruby. Her younger daughter, more diminutive and pale-eyed, is Pearl.

Cara’s relationship to each daughter is different, as are the girls’ personalities. Ms. Harkness brings us inside of Cara’s complex feelings for each. Readers share Cara’s struggles as a mother who is essentially the property of a childish, brutal man whose personal comforts are his only concern. Domestic life is a constant irritation to him, and he eventually finds his way back to Scotland, abandoning Cara and his daughters. Cara’s strength and self-sacrifice are set in sharp contrast to McKenzie’s boorish insensitivity.

With little social standing once abandoned by McKenzie, and no claims on property or income from him (beyond what he left behind) or from the British government, Cara and her three bastard daughters – like Cara herself subject to the prejudices against people of mixed race – return to Shillong. . . .

This gorgeous, exotic romance takes readers through almost half a century beginning in 1933, but its main focus is the twenty years of 1959-1979. These years focus on three generations of Indian and Anglo-Indian women: Prava, Ramona, and Samira – and ends soon after the birth of Samira’s daughter. Written in an elegant, vivid prose style, the novel explores the relationships between adventurous men from England and Northern Ireland who leave their lower middle-class situations for opportunities on tea plantations in India and the women they meet there. 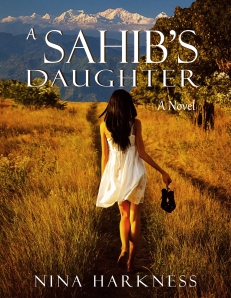 “Sahib” is a respectful title for white Europeans of social status living in colonial India, roughly equivalent to sir or master, and it applies to the young Brits we meet who hold minor administrative positions on the vast, remote tea plantations that employ large numbers of native functionaries, field workers, and household helpers.

The pivotal year in the decades the novel embraces is 1947, when India becomes an independent nation and yet maintains patterns of its colonial heritage, including patterns of social and economic hierarchies based on class and race. How these patterns play out in the lives of the principal characters is among the book’s most fascinating elements.

Who is an appropriate mate for an Indian woman? Is marriage to a white planter a desired goal or a pairing doomed to grief?  What is that status of racially blended individuals? How is it different in India from the U.K.? What are the chances for a comfortable entry or re-entry into English or Irish lifestyles for the family created in India? Where is home? The answers vary with the outlook and circumstances of the people themselves. In the end, they are individuals just as much as they are representative figures.

The most complex set of circumstances has to do with Samira. She is courted by two men. First comes Ravi, the exceedingly handsome and dashing Indian man for whom she feels enormous passion. But Ravi’s attentions to her are inconsistent and his periods of inattention are not sufficiently explained. We eventually find out that Ravi’s parents are not at all pleased with mixed-race Samira as a proper wife for their son, and they are putting enormous pressures on him to accept an arranged marriage. . . .