Interior design professional Joie Wilson did not set out to write a book, but rather to alert public officials and private citizens about the lifestyle treasure that existed in seaside Old Naples and how economic factors and notions of progress were jeopardizing its future. In the end, sharing her passionate insights through a book seemed to be the best way to make her case about what was important and appealing – and so much worth saving – about this community.  Partnering with Naples photographer Penny Taylor (who served for a decade on the Naples City Council), Ms. Wilson plunged in. Her informed enthusiasm, along with Ms. Taylor’s fine photographs, has resulted in a gem of a publication. 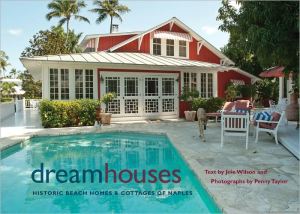 Avoiding academic jargon, Joie Wilson clearly sets forth the architectural features and history of each home, from its initial owners through the renovations reflecting the needs and aspirations of successive owners. Many of these renovations are adaptations to changing uses of the buildings, changing times, and especially changing technologies. However, what is amazing in Ms. Wilson’s discussion of these splendid specimens of the 34102 zip code is their stylistic integrity to the idea of Naples as a simple, yet comfortable, beachside community. In the processes of renovation and adaptation,  original structural elements have been maintained or duplicated. Original building materials have been salvaged for reuse.

Readers will learn a lot about the functional significance of the roof overhangs, the pitch of ceilings, and the size and placement of windows.

Many of the people who built or purchased these houses were affluent enough to live anywhere they chose. They were capable of owning huge mansions in any design or style, but they chose these relatively modest examples of a Florida vernacular architecture because they admired its practical elegance. 2,000 square feet well designed for the subtropical climate, fashioned of readily available materials, and balanced against one another into a gently planned community suited their tastes.

Though these buildings share architectural features and a Crayola palette that announces a community of recognizable stylistic character, each maintains its independence and originality. Each expresses, in ornamentation, decoration, and tasteful adaptations of a formative vision, the personalities who have flourished and who continue to flourish there. “Colorful personalities,” remarks Ms. Wilson, “tend to gravitate to colorful houses.”

The author makes it clear that these houses are first of all homes. This book is not a mausoleum or shrine, but a representation of places with lives going on inside of them and around them. Most of the homes are from half a century to a full century old. The hold and continue to inspire personal experiences and personal stories that Joie Wilson retells with fervor, economy, and grace.

Progress and economic stresses have so far not demolished this community, though it has been severely wounded. Similar houses have been leveled or remodeled beyond recognition.

When I asked Karen T. Bartlett which came first, the writing or the photography, she told me that while writing was the skill by she was first able to make a living, photography was her first creative passion. She began doing writing and editing work soon after her graduation from the University of Georgia, but she only slowly came to realize that her love of photography could turn into a career. Largely self-taught in both areas, Bartlett is probably best-known to Neapolitans as a contributing editor, columnist, and photographer for “Gulfshore Life.” She is also the author-photographer responsible for the new edition of “Naples, Florida: A Photographic Portrait.”

This 2006 publication from Twin Lights Publishers is not to be confused with the 2000 book with the same name. Bartlett had nothing to do with that. The new or second edition by Bartlett is one of its publisher’s best sellers.

Before turning to a career as a freelance writer and photographer, Bartlett had founded and served as president of the Bartlett Group, a highly successful Atlanta-based public relations firm. The Bartlett Group handled marketing programs for a major planned community, hotels, resorts, timeshare properties, and many other kinds of businesses. In 1988, “PR Week” recognized the firm in the top 7 among more than 250 Atlanta agencies.

In 1989, Bartlett moved her company to Naples and began working with many major Southwest Florida clients, including Robb and Stuckey and London Bay Homes. She created and headed up the first Home & Condo Dream Team for the highly successful annual Dream Home. She directed the initial publicity campaigns for both Miles Collier’s Collier Automotive Museum and Frances Pew Hayes’ Teddy Bear Museum, and she helped raise millions of dollars for worthy non-profit organizations, both directly and through corporate social responsibility programs.

After two decades in the public relations business, Bartlett decided to redirect her career interests to travel writing, editing, and photography. Before taking on her current assignment with “Gulfshore Life,” she did similar work for “N, The Magazine of Naples.” She also publishes travel articles, photographs, or both in many other print and online publications. Available for commercial assignment photography, Bartlett provides a sample of her vast portfolio on her website: karentbartlett.com.

Bartlett’s photographs are a major feature of “The Sarasota, Sanibel Island and Naples Book,” and she contributed the section on romance and luxury destinations to “The Best Florida Getaways.” Forthcoming in 2008 are two new titles with text and photography by Bartlett: “Islands of the Southeast Coast: Amelia, Hilton Head, and Georgia’s Golden Isles” (from Twin Lights) and “Spaaaaaaah Florida: A Guide to Florida Spas” (from University Press of Florida). The Twin Lights editors became so impressed with Bartlett’s writing, which they discovered almost by accident when she began revising captions that had originally been written by someone else for the Naples book, that they asked her to do the writing for several of their other books.

Karen T. Bartlett is a high-energy person, always in motion, and thus not cut out for studio work or the multi-hour waiting-in-place of the wildlife photographer. She needs to be “out there,” and she seeks to capture the emotion of the moment – to be, in a sense, part of the scene that she is shooting (though never as a subject). As a travel photographer, she says, you often only get once chance – one shot – at the nun disappearing into the cathedral or the expression on the snake-charmer’s face. You have to be alert and ready to pounce.

Lynne Howard Frazer enjoys the fact that her first merit badge as a Girl Scout was for writing. Eventually, writing became her profession. Raised in northern Virginia, Frazer earned her B.A. in American History from James Madison University. She later added an M. A. in Colonial American History from the College of William and Mary. During her graduate studies, she participated in a two-year Museum Management program jointly administered by the college and The Colonial Williamsburg Foundation.

The historian married a Naples native and moved here in 1986, soon finding her academic passion nourished by the rich history of the area. In that same year, she began working as a freelance writer. Frazer combined her university training and her writerly interests into a varied career that included serving as Director of Communications at The Conservancy and as Executive Director of the Naples Historical Society. She wrote, and continues to write, freelance articles for local, regional, and national magazines and newspapers. Many of her freelance assignments come from local nonprofit organizations.

Frazer has also been a freelance segment producer for WGCU-TV Public Media. She has worked on Arts Edition: Prime Time and Untold Stories, and she wrote and co-produced King Tutankhamun and the Golden Age of the Pharaohs, a half-hour special that won a bronze “Telly” award. Frazer also did a stint as a business reporter for the Naples Daily News. 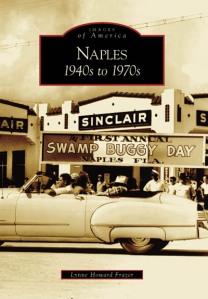 While working at the Naples Historical Society, she began to prepare her first book. How it happened is a story of being in the right place at the right time with the right credentials. Arcadia Publishing, a house that specializes in local and regional histories, was looking for someone to write a book about Naples. The publisher first approached Nina Heald Webber, whose collection of vintage Naples postcards was well-known, but Webber did not choose to get involved in researching and writing such a book, and there was Frazer – historian, writer, and Historical Society executive ready to step in. Naples was published late in 2004, making use of Webber’s collection as well as the holdings of the Naples Historical Society.

This book has a long sweep, from the town’s beginnings in 1885 through 1960 when Hurricane Donna nearly destroyed it. Through the well-selected and sequenced photographs, the story is told both visually and verbally. Many of the images in this book were never previously published. Frazer’s Naples is a great way for new and long-time Neapolitan’s and visitors to gain an understanding of a marvelous place whose unique history is being obliterated by development. Proceeds from this book benefit the Naples Historical Society.

More restricted in its temporal scope, but just as fascinating, is Frazer’s second book, Naples: 1940s to 1970s, published earlier this year (also by Arcadia). Frazier, who considers herself a social historian, pays attention to what is was like to live in the city during this period of its rapid development as a tourist destination and retirement mecca. She insists that this is an overlooked era, and she is pleased to have helped bring it to the attention of many readers. Once again, Frazer draws upon postcards from the Webber collection, but this time she also selects from the archives of the Naples Daily News (including photos from its earlier existence as the Collier County News). She is grateful to Gerry Johnson, the Naples Daily News Librarian, for generous assistance in accessing these materials.

Frazer’s research for the two books led her to conclude that the popular view of Old Naples as “just a sleepy little fishing village” is a misconception. “It never was that,” Frazer observes. “It was founded as a resort, though fishing became an important factor during the off-season. During the winter season, many fishermen took jobs as commercial guides.” Frazer decries the loss of community and genuine caring, qualities that she discovered to be part of the fabric of Naples in its earlier decades. Both books are perfect for private guestrooms and hotel guestrooms as well. Readers can either devour them from cover to cover or absorb a few pages at a time.

Frazer does not see a third Naples book in her immediate future. More likely is a narrative based on her “Atlantic Circle” voyage with her husband, Russell. The couple left Naples for an Atlantic crossing in 1999, visited more than twenty countries, and sailed back across the ocean in 2003, cruising the Caribbean islands from Tobago to the Bahamas. While in Europe, they wintered on the boat, a 44-foot Peterson named Blue Highway, in London, Barcelona, and Marmaris, Turkey.

Come and meet Lynne Howard Frazer at her book signing for Naples: 1940s to 1970s at Palm Cottage on Saturday, December 2 from 1 – 3pm. Palm Cottage, the headquarters of the Naples Historical Society, is located at 137 12th Ave. S., one block east of the Naples Pier.

Philip K. Jason, Ph.D., is Professor Emeritus of English from the United States Naval Academy.  A poet, critic, and free-lance writer with twenty books to his credit, this “Dr. Phil” chairs the annual Naples Writers’ Conference presented by the Naples Press Club. Send him your book news at pjason@aol.com.