Remember 2011 – the year of the Arab Spring? The turmoil in the Middle East provides a backdrop for Ms. Gussin’s fast-paced thriller. Ahmed Masud, middle son in a wealthy Egyptian family, is called back to Cairo to help prepare for his family’s future after the Mubarak regime collapses. Their wealth derives being favored by Mubarak’s son, who handed them an Egyptian cotton empire. Also, Ahmed’s parents wish to see his five-year-old son, Alex. Succumbing to their pressure, and unsettled by medical malpractice lawsuits, Ahmed steals his son away to Cairo, rashly jeopardizing his marriage and the American dream lifestyle he and his wife, also a plastic surgeon, have shared.

Readers will be puzzled by Ahmed’s sudden sense of family duty, as was his wife, Dr. Nicole Nelson, who is outraged and crushed by his behavior. She wants her son back! Nicole rallies the support of her twin sister Natalie and their accomplished, successful brothers.

A second crisis hits Natalie, who is in charge of a major program at a large pharmaceutical company. Its cancer drug has tested well and is saving lives with the promise of saving many more. However, people are dying – of constipation. The FDA insists that this serious problem be cleared up. The drug itself is not deadly; rather, the painkillers prescribed to lessen the patients’ suffering are causing the problem. Her career in the balance, Natalie has a difficult time balancing the needs of her company and her desire to aide her sister, reeling from Ahmed’s behavior. Natalie, however, is up to the task.

The Nelson family hires a major security agency to work on rescuing Alex. The chief of the security team has extensive connections and immediately puts them to use.

The plot runs back and forth among happenings in Egypt, Philadelphia, Uruguay, Belgium, and Liberia. The Masud family is under great stress, and Ahmed’s older and younger brothers are power-crazed psychopaths driven to extremes by the threats to the elite Mubarak establishment and by their own greed. There is a race to solve the pharma problem, another to control and relocate the Masud family, and through it all the chase after Nicole’s missing son. . . .

Mr. Larsen’s latest is now labeled as “A Jammer Davis Thriller,” linking it with two of the author’s previous novels. I, for one, am happy to approve the plan. I’m just thrilled to imagine more such techno-thrillers. In this one, not only is Jammer assigned to investigate a plane crash, he is also out to save his daughter Jen. She was on that flight but not accounted for after the crash, nor is another college girl, Kristin Stewart, with whom she had boarded the plane.

The investigation, performed officially by Colombian authorities with Jammer constantly overstepping his role in the matter, reveals that the crash was not survivable. It also reveals that the pilot and co-pilot were shot before the crash, along with one other person who turns out to be a Secret Service agent.

Figuring out the who, the how, and the why of this off-the-charts event takes Jammer and others on a dangerous journey. The examination of physical evidence and the exploration of countless “what ifs” leads to an unusual theory: the plane must have landed and taken off again – and not because of an emergency, but rather according to plan.

“Passenger 19” is not only a study in detection, it’s also a study in Colombia, its capital Bogotá, and the dense rain forests. In a country in which mob crime is among the largest businesses, those who wear official uniforms and hold government positions may or may not be trustworthy. Those who wear the uniforms or emblems of various paramilitary forces are likely to be private entrepreneurs who can be trusted to run illegal enterprises. The biggest, of course, are the drug cartels. Gaining ground are those in the kidnap-for-ransom business.

When it’s discovered that one of the dead men in a pilot’s uniform is not the pilot who had handled the original take-off (the uniform is too big), Jammer concludes that the first set-down of the plane was part of a hijacking. The later wreck would have been designed to get rid of witnesses.

Eventually, Jammer’s grudging Colombian counterpart, a military officer who oversees air transportation issues, is found murdered. Looks like he was getting too close to something.

The plot – with all of its carefully managed twists and turns of information, deduction, and action – keeps the pages flying. Even more impressive is Mr. Larsen’s handling of the technical material: the intricacies of aircraft design, handling characteristics, and controls. As Jammer and others discuss these matters, examine the tortured parts of the downed plane, and explore the crash landing’s impact on the terrain, readers are brought close to the analytical, scientific mind making its way through a myriad of facts to reach conclusions and determine actions. . . .

One reason you will turn these pages quickly is because of the high excitement level. Another is because the chapters are short and the spacing between lines is large. It’s easy on the eyes, just like the female characters that Mr. Wood conjures up. The 35th title in his Stone Barrington series, this outing shows the comfortable craft and audience knowledge of a pro who has published over 60 novels. 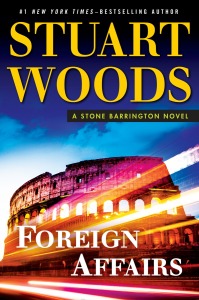 Unexpectedly, Stone is called to meet his business partners in Rome. While boarding the flight, he finds a beautiful young traveling companion who before long is a serious flirtation. Hedy Kiesler turns out to be the stepdaughter of a wealthy man with whom Stone does business. The flirtation continues until Hedy is kidnapped either for ransom or for leverage against Stone and his associates.

Italian mafia types do not want Stone’s people to put up a new luxury hotel without paying and paying and paying. Planned accidents and other threats and mishaps meant to interfere with the hotel construction lead to a nasty battle of wits and weapons. The major interference is a fire that practically destroys the building that Stone and his associates mean to remodel into the luxury hotel.

The plot is fashioned to exploit how and where the wealthy and fashionable travel and have fun. With and without Hedy, Stone’s situation takes him to Paris and to the Amalfi coast area. Lavish estates, gorgeous hotels, desirable automobiles, and sumptuous meals are normal in the circles in which Stone moves. He even has an exquisite private jet that he pilots himself. That sure helps out when you’re in a hurry.

What also helps, when things get sticky, is to be part owner of a premier security firm. Amazing how armed manpower and high tech gadgetry can open doors, assure safety, and get things done for you.

Mr. Woods creates a world in which such things are the Stone Barrington norm, though it’s hard for readers to be envious when they are taken on such an attractive trip. How does this work? By making Stone seem like a regular guy – which in many ways he is.

And yet, who else can travel and vacation with New York City’s police commissioner? Who else has buddies in the highest ranks of government? Even a president who will do him personal favors? Who else would or could encounter a Catholic Cardinal who wholeheartedly and with great force joins his fight against the highest echelons of Italian mobsters?

Who else would be able to get the meaningful cooperation of Italian law enforcement, so often susceptible to being bought out by the criminal overlords? . . .