“The Ruined House: A Novel” by Ruby Namdar

This breathtaking tale of a prominent professor’s undoing is expertly woven with biblical passages.

Some books are so spectacularly original, so far beyond the boundaries of any reader’s expectations, and so challenging that they establish a new point of reference for any further discussions of literary achievement.

Ruby Namdar’s The Ruined House, set at the dawn of the 21st century, explores the givens of a cataclysmic era that may become a period of tumultuous cleansing. Though centered on the physical, emotional, mental, and spiritual disintegration of a successful, middle-aged college professor, it fully engages the new American century’s self-masking: its adulation of elites and its confusion of cultural values. 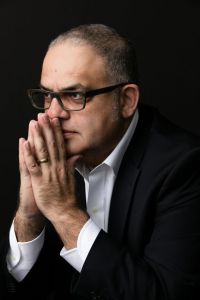 Andrew P. Cohen, an accomplished and proud secular Jew, has tripped over the scales of hubris and found himself to be a foul beast. His aura of polite self-congratulation has become contaminated and slowly begins to smother him. His many faults, the recognition of which he has artfully hidden from himself for decades, are in the process of being revealed.

The selfishness with which he ended his marriage is exposed to him. The comfort and security he felt in his academic achievements, the physical attractiveness and health that he nurtured and in which he delighted, and his assumption of fully controlling his always upward-bound destiny are most painfully stripped away.

This material, represented in the graphic style of the original manuscripts, focuses on the preparation of the Temple’s high priest for performing his duties during the seven days leading to Yom Kippur, the holiest day in the Jewish calendar. These duties are largely rituals of purification, but also include various kinds of sacrifices — offerings to God.

Inner and outer cleansing of the self and the temple are described, along with a number of sacred objects like fire pans and candelabras. The strange ceremonial practice of purifying holy places by sprinkling them with blood is included. . . .

To read the full review, click here: The Ruined House

“After One-Hundred-and-Twenty: Reflecting on Death, Mourning, and the Afterlife in the Jewish Tradition”

This new edition to the Library of Jewish Ideas series is at once a scholarly journey, a meditation, and a remembrance. Most likely there is nothing comparable in print. In fact, toward the end of the book, Halkin lets us known that the concerns he has pursued are barely mentioned in the works of modern and contemporary Jewish writers, including those who belong to one or another segment of Orthodoxy. 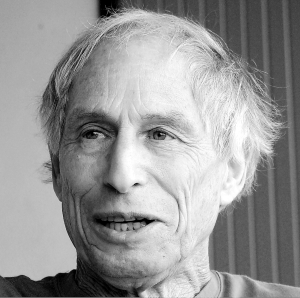 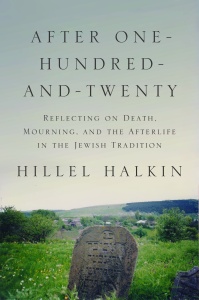 And yet Halkin has created something at once intellectually stimulating, profoundly frightening, and ultimately reassuring. It is like plunging into the abyss and finding the buoyancy and healing power of salt water. Some sugar as well.

Halkin makes it clear that his perspective is that of a non-observant Jew, yet he is a knowledgeable one and, perhaps more importantly, he is a curious one. He asks, “how can a life that has existed cease to exist without a trace? How can the universe have no memory of it?” From here he enters the world of Jewish texts that consider Jewish notions of the afterlife.

After a pleasantly teasing introduction, Halkin builds five sturdy chapters in which he navigates through the history of ideas as Jewish culture undergoes large and small shifts and larger and smaller degrees of influence from neighboring cultures. He sets Jewish considerations of death and something beyond it in the context of Greek, Egyptian, and Babylonian constructions, finding the common denominators and the essentially Jewish distinction. . . .