This is the 14th installment of Mr. Macomber’s classic “Captain Peter Wake Novel” series. It is the first with his new publisher, and what a wonderful pairing it is to have such a fascinating series under the imprint of the Naval Institute Press. The series is also known as the “Honor” series, as that word appears in each of the titles. Old and new Macomber readers will appreciate the useful “Timeline of Peter Wake’s Life” that sets the protagonist in his historical context and in the parameters of his unique values, skills, and personality. 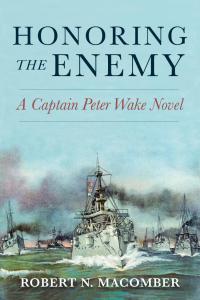 The author blends international politics, seamanship, strategic planning, and technology into a succulent stew. However, little else is succulent in this wartime drama notable for undependable supply lines and a scarcity of nourishment.

What we’ve got here, folks, is the Spanish-American War as adversaries battle for dominance in Cuba during June and July of 1898.

Wake is a proud patriot, always motivated to serve his country, but these days he has a bit of a chip on his shoulder. After long years working up the responsibility ladder, he thought he had proven himself worthy of being given command of his own ship. But that didn’t happen. He had made too many enemies and – as a man who doesn’t mince words – there was little support for this former espionage specialist. No politician, he just didn’t have the right connections. After all, he was one of the few Navy officers who had not graduated from the Naval Academy.

Rather than driving a ship, he heads a small Navy team that is a liaison to the U. S. Army’s effort to free Cuba from Spanish rule. He reports to generals who are orchestrating a joint U. S. and Cuban liberation force. In this effort, he is finding the Spanish forces estimable and discovering that the U. S. effort mixes clever initiatives with large measures of incompetence. 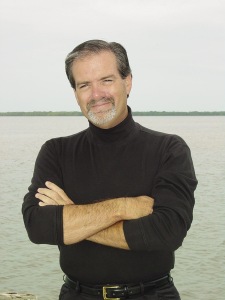 The story Wake tells us involves not only his perspectives and actions, but his remembrance of how effectively his old friend Theodore Roosevelt comported himself during this campaign. Indeed, Mr. Macomber’s portrait of the president-to-be, filtered through Wake’s observations and judgments, is among the book’s many engaging threads, with unexpected comic elements to leaven the blood-soaked, storm-tossed, death-inviting narrative. . . .

To see the entire review, as it appears in the August 8, 2019 issue of the Naples, Palm Beach, and Venice editions of  Florida Weekly, as well as the August 14 Fort Myers  and August 15 Charlotte County editions, click here:  Honoring the Enemy