Almost down for the count, Kirk McGarvey rebounds to outdo the bad guys

This electrifying thriller continues the battle between his continuing hero, Kirk McGarvey, and the shrewd, highly skilled freelance assassin introduced in Tower Down (reviewed in these pages). Let’s call that man, who has several identities, Kamal. He has roots in Saudi Arabia, but easily blends into Western environments. For sale to the highest bidder, he has his own agenda.

At the top of Kamal’s list is the murder of “Mac,” his nemesis. Not only must he cleanse the world of this CIA operative and former director, Kamal needs to see Mac suffer, and maybe Mac’s girlfriend as well. Mac had foiled Kamal’s plan to bring down a second Manhattan skyscraper in “Tower Down.”

However, what’s making Kamal a very wealthy man is his agreement to put Mac out of the way for other reasons. Groups with opposing attitudes toward the new U. S. president want Mac out of the way because he is the person most likely to detect and foil their plans.

The group wishing to discredit the new president is bankrolling a series of terrorist catastrophes meant to undermine the stature of the inexperienced, ill equipped president. He will, so goes the scheme, inevitably blunder in ways that will make his replacement inevitable. This group’s leaders have put Kamal on their payroll.

The cadre that supports the new president wishes to use similar schemes to opposite ends. They will be manipulating events to make him look good; not only will the outcome assure solidifying his base, but also expanding it. 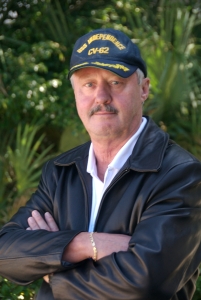 The novel opens with an explosion meant to destroy Mac’s car and him with it. Planned by Kamal, misplacement of the explosive material by a hireling lessens the impact. Nonetheless, Mac loses a leg. The CIA leadership thinks it best for him to recuperate in secret and for the word to get out that he has been killed.

While Mac gets used to his peg leg and recovers from other wounds, he participates in the planning that will draw out the crafty Kamal.

Mr. Hagberg alternates the center of consciousness so that readers switch back and forth between following Kamal’s thoughts, emotions, and actions and following Mac’s. The tradecraft and courage of each is well displayed, as is their sharp contrast in values. Suspense builds higher and higher as the inevitable confrontation draws closer and closer. . . .

To read the entire review, as it appears in the May 23, 2018 Fort Myers Florida Weekly and the May 24 Naples, Bonita Springs, Charlotte County, and Palm Beach editions, click here:  Florida Weekly – Flash Points