Maeve Donnelly is the thirty-year-old protagonist of this elegantly written first novel. She is part of the shark club triumvirate, the other two being her long-time boyfriend Daniel and Daniel’s daughter, six-year-old Hazel. This informal mutual interest group was put together to help Hazel find stability in a young life that has been – and still is –filled with uncertainty. 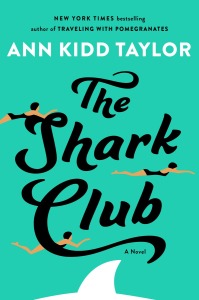 Maeve and Daniel have decided to see if their long-severed relationship, once seen as strong and vibrant, can be restored. Hazel is the unplanned child of a woman with whom Daniel had a quick affair. That misstep cost him Maeve’s trust. Hazel’s mother died. Now the question is whether these three individuals – the only members of the shark club – can form normative family bonds. Maeve and Hazel are bonding in beautifully, but there is still something keeping some distance between Daniel and Maeve.

The matriarch of the family is Maeve’s grandmother, Perri. She is the owner of a famous hotel, the Hotel of the Muses, on an island off the Southwest Florida coast. Nearby landmarks of Naples, Florida help orient readers who know the area. When she is not on a research trip, marine biologist Maeve lives there, as does her twin brother Robin. Daniel, chef at Hotel of the Muses, lives nearby.

Taylor photo by Vanessa A. Rogers

Relationships are complicated on many levels, and with them Maeve’s destiny. Because Robin and Daniel are friends, Robin knows too much about the state of things between Daniel and Maeve. And Robin is something of a wild one, a trouble-maker who lived in the shadows of the bright lights that her steadiness and success had shown on Maeve, who had long ago grown tired of cleaning up Robin’s messes.

Working as the hotel’s manager, Robin has literary ambitions, hates the regimentation of his job, and yearns to capitalize on his one true talent. However, the book he has managed to sell exploits what he knows about the Daniel-Maeve story. Maeve is hurt and bewildered by what she finds when Robin shares his manuscript with her.

On the research journey to Bimini from which she has only just returned, her working partnership with an attractive young man named Nicholas – her dive partner – has turned into something more serious than she had expected. Her imagined future is fluttering back and forth between these two men. . . .

To read the full review, as well as an interview with the author, as they appear in the June 21, 2017 Fort Myers Florida Weekly and the June 22 Naples, Bonita Springs, and Punta Gorda / Port Charlotte editions, click here: Florida Weekly – The Shark Club