This fascinating techno-thriller grows out of the reality of nonstop cyberwar that, while largely invisible, is constantly going on all around us. Not only do nations spy on one another by hacking computers, in both the public and private sectors of enemies and friends, bandit freelancers are also at work. National infrastructures are vulnerable. What’s to keep major electronic grids safe from cyber attack?

T. L. Williams imagines a situation in which China devotes its computer resources to bringing down the U. S financial system and thereby collapsing confidence in the dollar as the world’s reserve currency. This outcome would be a giant step toward China surpassing the U. S. as the world’s sole or dominant superpower.

Cyberwars have complex offensive and defensive elements, and Mr. Williams portrays the technological strategies and tactics in fascinating detail. He brings us to the highest level of the U. S. security establishment and shows the bureaucratic workings, allowing readers to eavesdrop on the decision-making conversations of the key players. He also takes us into their private thoughts.

The catalytic moment is the discovery of a communication from a middle-rank Chinese technocrat who is at once in charge of a Chinese offensive and is motivated to “come over” to the American side. Someone needs to be selected who has the experience and skills to be Li’s American handler. Astonishingly, this person is Logan Alexander, the central character in this author’s earlier novels: “Unit 400: The Assassins” and “Cooper’s Revenge.”

The plot progresses through a Tom Clancy-like bombardment of technological detail, a soup bowl full of acronyms for government agencies (both American and Chinese), the shared expertise of U. S. cyberwar specialists, and the physical movements of the key players. 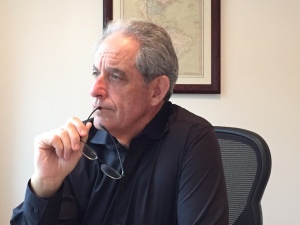 More than most novels with China settings, this one takes us not only to familiar places like Hong Kong, but also to far less known areas of that fascinating country. Readers also spend time in Washington DC and environs, Thailand, New England, and elsewhere. In each of these settings, Mr. Williams portrayss terrain, neighborhoods, individual buildings, offices, residences, and laboratories with vivid authority. He also details transportation systems and communications systems with great skill. . . .