I don’t know if a new subgenre is blooming in crime fiction or not. Alex Kava’s recent “Breaking Creed” launched a new series about a dog trainer who does contract work for law enforcement agencies. Now James O. Born offers a new book that could very well also launch a series. It gives a detailed portrait of a K-9 unit operating within the Palm Beach Sheriff’s Office. Like Mr. Born’s earlier novels, this one capitalizes on his extensive experience as a law enforcement professional. 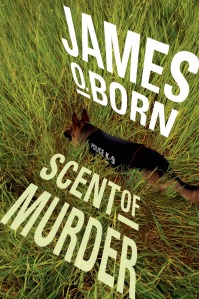 Tim Hallett is rebuilding his career. He had lost his position in the prestigious Detective Bureau two years back by mishandling the case of a child molester. Retrained as part of a man/dog team, Tim has been rebalancing his life. Rocky, the Belgian Malinois with whom Tim is partnered, is more than a coworker; he has become an important part of Tim’s life. Along with his young son, the divorced father has created a new family.

Mr. Born’s sensitive handling of the relationship between man and dog is superb. This is a bond of true respect, mutual dependence, and responsibility. The author makes Rocky as real as any special-skill partner – a personality readers will come to know quite well. Certainly this is a book for dog-lovers, but those who aren’t canine fans can thoroughly enjoy it. I know I did.

There is a murderer out there kidnapping and abusing teenage girls before killing them. One girl manages to survive the perpetrator’s worst intentions and has been rescued by the K-9 team. Others are in harm’s way. Suspense is built by alternating the point of view. Most often, we are given Tim’s perspective, sometimes that of another one of the human K-9 team members. We also enter the mind of the perpetrator, Junior, whose impulses are out of control and whose planning is meticulous.

And (are you ready for this?) sometimes we are given Rocky’s point of view. At first, I found this device disturbing – a bit too much Scooby-Doo. However, after a while it grew on me and gained credibility.

Tim’s unit is comprised of three K-9 teams and a supervisory dog trainer. The police service dogs and their human partners have a range of skills that are put to good use in the pursuit of the criminal. Mr. Born draws the action scenes with authority and economy. He provides a detailed and engaging education in how such operations are managed.

The case that got Tim in trouble comes into play in the present situation and influences the direction of the investigation. Eventually, the clues lead in a surprising direction.

While the investigation plot provides the major center of interest, Tim’s relationship with his ex-wife and the possibility of a new love interest add stimulating complications and rounding of the protagonist’s character. Some of the subordinate characters are similarly elaborated, and all of the supporting cast members are carefully differentiated.

Another interesting aspect of “Scent of Murder” is the portrayal of interaction, competition, and strife within the working of the law enforcement community. Ambition, pettiness, vanity, and grandstanding all play a part in the world of law enforcement politics. These factors affect Tim’s progress in rebuilding his reputation among his professional associates. . . .