The Sunshine Skyway story: a troubled bridge over shallow waters

“Skyway: The True Story of Tampa Bay’s Signature Bridge and the Man Who Brought It Down,” by Bill DeYoung. University Press of Florida. 208 pages. $24.95. 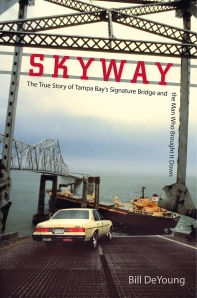 A skillful combination of local history and biography, Bill DeYoung’s book reveals the sharp eye and patient research of a seasoned Florida journalist. His study makes us think about the societal role of iconographic structures, their majesty and their destiny. Mr. DeYoung’s portrait of the interplay between natural forces and human limitation reminds me of Shelley’s great sonnet, “Ozymandias,” with its timeless concern about human vanity and human vulnerability:

I met a traveller from an antique land
Who said: Two vast and trunkless legs of stone
Stand in the desart. Near them, on the sand,
Half sunk, a shattered visage lies, whose frown,
And wrinkled lip, and sneer of cold command,
Tell that its sculptor well those passions read
Which yet survive, stamped on these lifeless things,
The hand that mocked them and the heart that fed:
And on the pedestal these words appear:
“My name is Ozymandias, king of kings:
Look on my works, ye Mighty, and despair!”
Nothing beside remains. Round the decay
Of that colossal wreck, boundless and bare
The lone and level sands stretch far away.

The history that Mr. DeYoung assembles is marked by four important moments. First, the opening of the original, majestic span of the bridge in 1954. Next, the delayed opening of its twin span in 1971. Then, most notably, the freighter Summit Venture’s collision with and destruction of the newer bridge on May 9, 1980. Finally, the replacement of the twin bridges in 1989 with an even more astonishing structure.

The author places the planning and execution of the Sunshine Skyway Bridge in the context of the Tampa Bay region’s population and economic growth. He discusses, perhaps too briefly, the tragedy five months earlier when a coast guard vessel and a passenger ship collided near the bridge, underscoring the difficulty of navigating the deep, man-made shipping channels of otherwise shallow Tampa Bay.

In his moment by moment narration of the May 1980 disaster, Bill DeYoung creates the intensity we are used to finding in mystery thrillers. He takes us, as much as possible, into the thoughts and emotions of the principal players as the unfolding calamity is perceived too late in the fury of a sudden, blinding rainstorm.

The principal character, who receives a full-dress biography, is harbor pilot John Lerro. Lerro’s education and training, his experience, his reputation among his peers, and his domestic life are given detailed attention. It was Lerro who had the responsibility of boarding the inbound Summit Venture and guiding it under the Sunshine Skyway to its port destination. He failed, but could anyone have succeeded given the combination of circumstances that Mr. DeYoung so effectively presents?