Suppose the second Atlanta Olympics is about to begin and the news frenzy is ratcheting up while lavish parties feed the buzz. Atlanta’s business and political leaders are all eager to make a killing. Instead, a killing makes the news and threatens to upset their plans, as law enforcement agencies and news crews make the death of a movie star their primary focus.

Waning film star Cav Campbell didn’t just die, he plummeted from the 46th floor of a condo skyscraper and was impaled on the tower mast of TV news truck on hand to cover the celebratory pre-Olympic partying. Campbell, the boy-toy of Global News Service’s chief owner Brenda (“Bren”) Forrest, was a coke-head with a healthy tab and tan. Readers know early-on that he was tossed to his death by Eurasian beauty Lia Lee as part of a plot to weaken Bren’s hold on GNS so that British television and illegal drug entrepreneur Ian Phelps can take over her company. 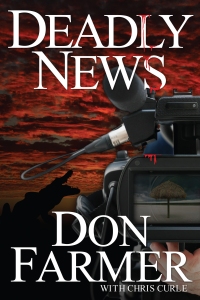 Suspense rises from the question of whether or not the diabolical Phelps will succeed.

However, the investigation process is far from the major center of interest, especially since it does not take hold until the final fifty pages of the novel. Lia Lee is murdered before she can be found out (let alone arrested) – or is that Tia Lee, Lia’s twin?  Hmmmm, perplexing.

Much more engaging and much more authoritatively presented is the world of television news. Whether detailing the workings of the CNN-like Global News Service or the local Atlanta Channel  3 and its NewsBlitz3 so-called Satellite News Center, Mr. Farmer and Ms. Curle have it nailed. The bits and pieces of reporting, jockeying for position on camera or at the site of the action, and the control room banter are handled with an authenticity colored by sharp, satiric overtones. 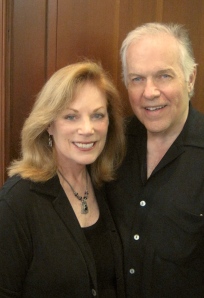 The authors provide us with pomposity, other forms of vanity, eagerness, aggressiveness, industry, silliness, and even some downright professionalism. The race for getting the news out first, maybe even getting it right, regularly comes alive in the novel’s most entertaining passages. The parody of news-speak gets repetitious after a while, but it never gets dull. . . .