A bridge between two deaths

Henry Hoffman’s fourth novel is a taut mystery-thriller that employs the setting of Tampa Bay’s majestic Sunshine Skyway Bridge. The real-life tragedy of a bridge disaster in the Spring of 1980 inspires the novel’s premise: a young woman riding a bus across the bridge during a storm plunges, with others, to her death when a runaway freighter smashes into the bridge, causing a collapse. Where was she going? Why was she traveling without her husband? Was the catastrophe really accidental? 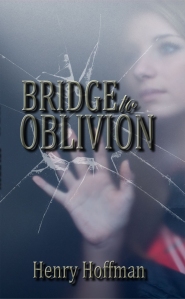 And what led her younger sister, seven years later, to commit suicide by leaping from that same bridge? Was it really a suicide?

There is a witness to the 1987 Charlene Gibbs suicide, a young man named Adam Fraley. When Adam sees Charlene contemplating her leap, he attempts, unsuccessfully, to talk her out of it. Unsatisfied with the police work and media reporting, Adam launches his own investigation. One thing bothering Adam is that no one mentions the fact that Charlene’s sister, Carlene, has died in the bridge collapse seven years earlier. “No one” includes Carlene’s widower, Monte Wheeler, who was city editor of a major Tampa area newspaper when his wife perished and is now its executive editor. Why doesn’t he want anyone to make the connection? Clearly Charlene was drawn to this spot because of what had happened to her sister.

Adam had served several years in the Air Force before deciding, in his mid-twenties, to get a college education.  He is now attending classes at a local community college while working for a small private detective agency. He’s learning the trade, but mostly doing paperwork. His boss and mentor, Pete Peterson, somewhat reluctantly allows Adam to attempt an independent investigation – but on his own time. Before long, Adam is stirring up trouble and enraging the local power elite. Is there a cover-up of some kind? What? Why?

Author Hoffman skillfully develops Adam’s methodical investigatory style and his commitment to finding the truth. While Adam learns by doing, the reader learns by following him around. Instrumental to Adam’s education in interviewing and fact-finding is another professional, his gorgeous journalism professor who, ironically, once sought the position that Monte Wheeler holds. Though Professor Nancy Egan, who also works at the managing editor of a rival paper, strives to keep her distance, it’s clear that Adam is smitten.

Adam visits the Gibbs sisters’ home town, scours police records, and discovers that he is being followed. Along the way, he also learns that Charlene Gibbs had a child soon after her sister died – the father’s name unrecorded. . . .