Clouds Across the Sun, by Ellen Brazer. TCJ Publishing. $14.95 (and available as an e-book)

What a premise! As WWII nears its end, Hitler devises a plan for world conquest through infiltration of the U. S. government and the governments of other nations. A select group of Third Reich henchman are commanded to marry well (racially and genetically speaking), make their way to the U. S. and elsewhere, program their children as Nazi operatives, and maneuver them into positions of influence and power. In two or three decades, the super-reign will begin to take hold, and world domination will be at hand. 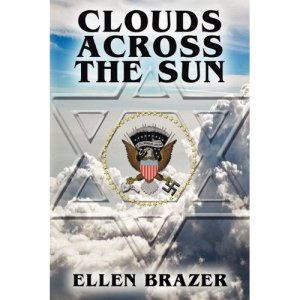 When we meet eleven-year-old Jotto Wells, an intelligent and lovely girl living in pre-boom Naples, Florida, the process is underway. Her father, Hans, is one of those whom Hitler has selected, and Hans has readily accepted the mission. He is bringing up his daughter to be one of the stealth Nazis. Through hypnosis and other strategies, her future is being shaped.

Hans Wells is one of many Nazis who have found their way into the United States toward the close of the war and soon afterward. In its rush to gain a cadre of top-notch scientists and to accumulate information about the new adversary – the Soviet Union – the U. S. has turned a blind eye toward many suspected Nazi agents and sympathizers. Others have managed to keep their allegiance hidden.

Step by step, Ellen Brazer details the development of the plot along with the character of Jotto, who softens her name to Jo. Capable, beautiful, and yet with some kind of cloud hanging over her, the young woman excels in boarding school, college, and law school. She becomes a senator in the New York State government and the intended of a man being groomed for the presidency (in part by Nazi forces).  Along the way she is befriended by an older man, a famous and wealthy actor, one of several characters who affect Jo for the better. They function as alternatives to the parents and the uncle who continue to view Jo as a tool. Together with Jo, these friends attempt to thwart the Nazi scheme. At each revelation, the suspense thermometer shoots up a few stripes.

The novel has a broad scope, bringing us to Bolivia, several U. S. settings, Israel, and Lithuania. It also offers compelling intrigue, a series of romantic interludes, and a sophisticated presentation of the age-old question about the roots of identity. Which prevails: nature or nurture? Will Jo’s indoctrination prevail over her “better” nature? It will take a while for readers to understand how this question is complicated by the discovery that Jo’s true mother, thought to be dead, was the wife of the famous actor who had befriended her. And there are more surprises about this character. But my lips are sealed.

“Clouds Across the Sun” will engage readers with its the captivating story line, varied settings, and well-drawn characters. At http://www.ellenbrazer.com, one can learn more about the author and order the book. It is available as well at major online booksellers.

Ellen Brazer employs memories of her Naples childhood in her book. In the 1960s, her family belonged to the Jewish Community Center of Collier County, which later evolved into Temple Shalom. Her uncle, Garson Dinaburg, was the congregation’s first president.