When I first heard about Carl Steinhouse’s new book, Barred, I thought it focused on the St. Louis, a ship carrying some 900 Jewish refugees that was turned way from Miami and forced to return to Europe. Thus, my first question in the interview that follows was a bit off-center, yet Carl made good use of it anyway.

PKJ: What first got you interested in telling the story of the St. Louis?

CS: Actually, this is not about the St Louis in the literal sense, because this story begins after the St. Louis incident, on 9/1/39, when the Germans invaded Poland. The St. Louis incident comes into play for its historical influence on later events, such as the Jews who arrived on the Quanza. Based on the St. Louis history, Eleanor Roosevelt, James MacDonald and some of their more liberal colleagues convinced FDR to let them handle this matter, knowing the State Department intended a repeat of the St. Louis affair (i.e., sending them back to their deaths in German-occupied Europe). These refugees, as a result, were admitted. 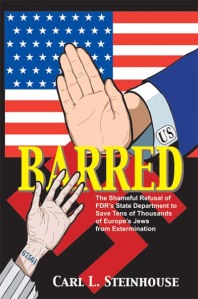 PKJ: How does Barred fit into your “Living History” series?

CS: I became interested in telling the story of FDR and the State Department almost from the beginning of my Holocaust research because in preparing each of the previous books, I learned that the draconian immigration policies of the US greatly hindered the escape of European Jews from every country in Europe occupied or about to be occupied by the Germans. Each of my other books contains scenes of desperate Jews being denied visas.  So this most recent book was the result of a natural progression.

PKJ: How does Barred differ from the other titles in the series?

CS: This book explains the rationale (if you could call it that), motivations, and practices behind the denial of visas to Jews in mortal danger who could have been saved. My other books touch on the subject, but it deserved a full airing. To bring home the enormity of the US government’s immoral handling of immigration during the Holocaust (State Department memos specifically targeted Jews for denial of visas simply because they were Jews), I had to portray, graphically and dramatically, the efforts of many, including survivors, to bring the horrors of the Holocaust to the attention of the State Department and FDR. So, once again, I dramatized the horrors the Nazis inflicted on the Jews and others, building on the testimony of those who risked their lives to witness the horrors. These people revealed in horrifying detail what they actually saw or experienced—details that were brought to the State Department and promptly dismissed and buried, or to FDR, who chose to let the State Department handle such matters (and also take the heat).

PKJ: What were your main research sources for this book?

CS: Biographies and autobiographies of Jan Karski and of inmates who escaped, as well of personalities in the free world, in the US and Switzerland, who brought the details to the attention of the State Department and FDR. I also explored books on Eleanor Roosevelt (who was a giant in the effort to save the Jews); many, many books about the Holocaust; and Internet sources.

PKJ: Through whose eyes do you tell the story?

CS: Through many eyes, depending on the scene. Through the eyes of Karski, who snuck into concentration camps posing as a guard and into the Warsaw Ghetto during the siege by the German Army; through the eyes of concentration camp escapees; through the eyes of Jewish representatives in Switzerland who received these stories as well as secret information imparted by high-ranking German officials risking their lives to bring out the truth, and the frustrations of these Jewish representatives, stonewalled by the State Department. Last, but not least, through the eyes of Americans, such as Breckenridge Long and Cordell Hull in the State Department, Harold Ickes in the Interior Department, FDR, Eleanor Roosevelt, Rabbi Stephen Wise, and Secretary of the Treasury Henry Morgenthau, Jr.

PKJ: What are the most important aspects of this story that you want readers to remember?

CS: Of course the mantra of the Jewish people on the Holocaust: NEVER FORGET! Even in the free world countries, there are government officials with their own agendas, such as anti-Semitism, willing to further that agenda by supporting, however subtly, the actions of despots, dictators and monsters in genocide.

PKJ: What were the special challenges of putting this book together?

CS: The book was of far greater scope and complexity than my previous efforts. I was not only dealing once again with the horrors of the Holocaust, but also with the United States government and its policies during 1939-1945. And also with historical figures, some revered in the eyes of many. This complexity compelled me to footnote (actually, endnote) most of the facts, documents, and conversations. Being an expert in the Holocaust was not sufficient; I had to understand the workings of the US government during that period and the personalities that occupied it. Thus, this project took much longer than my previous efforts.

Neapolitan Carl Steinhouse was one of the first subjects of the “Book Beat” column back in July 2006. For biographical information and comments on his first three books, go to naplessuntimes.com and use the search tool. Also, visit his website: carlsteinhouse.com.

Philip K. Jason, Ph.D., is Professor Emeritus of English from the United States Naval Academy.  A poet, critic, and free-lance writer with twenty books to his credit, this “Dr. Phil” chairs the annual Naples Writers’ Conference presented by the Naples Press Club. Send him your book news at pjason@aol.com.