There are few writers, publishers, or other professionals in the book business who find success in several subject areas. Passionate purpose often dictates a fruitful path in a specialized niche. Such is the case with Karla Wheeler and Quality of Life Publishing Company, which is the direct outgrowth of Wheeler’s personal and professional hospice experience.

Karla Wheeler grew up in Maryland, Philadelphia, and Cleveland. After marrying her Canadian husband, she moved to Southwestern Ontario in 1978 where she studied journalism and became a newspaper reporter and editor, the founding editor of a monthly business magazine, and editor of a bi-monthly lifestyle magazine. Having enjoyed visits to relatives in Naples, she and her husband decided to move here in 1989 to be near her parents. Wheeler sought a low profile career after being too much in the public eye as a highly visible journalist, and she found one as contract editor for several medical magazines: Cardiology World News, Geriatric Consultant, Contemporary SeniorHealth, and Physicians’ Assets. These experiences taught her how to research clinical material. 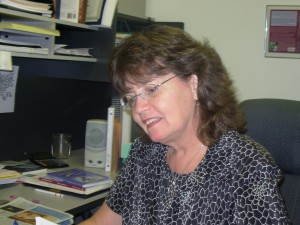 Wheeler has been a hospice volunteer for seventeen years, ever since her grandmother’s death following six months of hospice care, a process with which Wheeler was intimately involved and by which she was greatly inspired. When her father died in 1998 after having received hospice care for only seven days, Wheeler founded the outreach newsletter Quality of Life Matters. Even at the time of her grandmother’s death, Wheeler had recognized the need to help medical professionals lead the families of terminally ill patients to the hospice philosophy. Following her father’s death, she dedicated her career to easing the way for dying patients and their families through her own writing and by leading the editorial team at Quality of Life Publishing (QofL), begun in 1999.

The Quality of Life Matters newsletter, which supports the educational missions of the hospice and bereavement community, can be customized for hospices to distribute as their own educational service. For example, the newsletter masthead might read, as one does: “Provided as an educational service by Premier Hospice.” The customized version can include contact information for the particular hospice that is making the newsletter available, as this one does for Premier Hospice’s facilities in three states. This quarterly publication now has a print run of 75,000 copies. Recently, QofL began a Canadian edition.

Quality of Life is also a book publisher. Several of the books on the QofL list are by Wheeler. They include the very first book, Afterglow: Signs of Continued Love, published in 2002. This title was an outgrowth of a grief support column she wrote for the Scripps Howard News Service. Wheeler has created several follow-up pamphlets in the “Afterglow” series. She has also written Heart-Shaped Pickles and Timmy’s Christmas Surprise, both aimed at helping children work through the bereavement process, the latter focused on adjusting to the loss of a pet.

Naples resident Richard Ballo’s Life Without Lisa tells the author’s story of being widowed with small children to raise. Surprised by the rapid advances of his wife’s cancer, Ballo was unprepared to deal with her decline and death. Fortunately, hospice services were able to provide him and his children with grief support classes, which were enormously helpful. By being brave and generous enough to share his experiences, he in turn has been helpful to others. The power of Ballo’s narrative was recognized by the Florida Publishers Association when it received a special award last month at the FPA’s Ed-U-Conference.

Here to There, Grief to Peace, written and illustrated by Diana Jacks, Ph.D., traces a nine-step process from despair to reconciliation, giving necessary encouragement along the way. A useful tool for professional counselors, it is accessible for any reader. Dianne Durante’s Everyday Symbols for Joyful Living and Sandy Wiltshire’s My Gift of Light are focused on inspiration and hope. The latter is a personal narrative of psychic connection with the departed. Penny Bear’s Gift of Love, by Penny Wigglesworth, is another title – like Wheeler’s own – aimed at young readers contending with the grieving process. QofL distributes, but did not publish, Maryann Schact’s A Caregiver’s Challenge, a book designed to walk caregivers through the frustrations and challenges that they must inevitably face. It blends the author’s own experience in that role with her professional experience as a psychotherapist.

These titles are designed to be of use to hospices, hospitals, churches, schools, funeral homes, and other outreach organizations, and for many such organizations special prices are available. However, as should be obvious, we all know people, including ourselves, who can benefit from the advice and solace found in such publications. As Wheeler reminded me when I visited her Naples office, one out of every one person dies! And for every death and lingering decline, there are many caregivers, loved ones, and mourners who need help. By publishing books that are timeless in their concerns and application, Wheeler worries less than other publishers do about obsolescence and short shelf life.

Karla Wheeler is also editor of the Florida Publishers Association’s monthly publication, FPA Sell More Books!Newsletter. In this role, she helps the many publishers in our state share information and advice on marketing, order fulfillment, and other areas of mutual concern.

Find out more about this successful niche publisher at qolpublishing.com.

Philip K. Jason, Ph.D., is Professor Emeritus of English from the United States Naval Academy. A poet, critic, and free-lance writer with twenty books to his credit, this “Dr. Phil” chairs the annual Naples Writers’ Conference presented by the Naples Press Club. Send him your book news at pjason@aol.com.